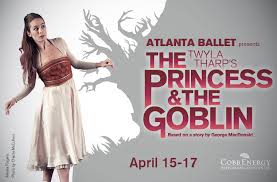 The Princess & The Goblin
Atlanta Ballet
through April 17, 2016

The Princess & The Goblin is a new ballet conceived and choreographed by Twyla Tharp on a commission from our Atlanta Ballet in conjunction with the Royal Winnipeg Ballet in 2012. Twyla Tharp based the production on a children’s book about some goblins which was written by George MacDonald in 1872, and she directed the premiere.

It is a story about some weird creatures, goblins, who live underground and have a bad habit of abducting children. But, don’t fret as nobody gets hurt in the ballet. The story from the book is kind of convoluted with the princess trying to get her father to intervene, his failure to do so, the Great-Great-Grandmother coming to her aid, and some more twists and turns.

But, the story is not one that one needs to delve into past and the idea that there are obvious good guys and bad guys, and it’s about who will win out in the end, and you know it has to be the goodies.

A couple of aspects of this ballet make it truly enjoyable. The score was created by Richard Burke and features music of Franz Schubert; and it really is one that is enjoyable even if you were just listening to it on a CD. And this production features both the ballet Company of more than 20 dancers as well as more than a dozen youngsters who get to take the stage en masse and they’ve learned their steps and timing so well. One has to think what a thrill it must be for the youngsters to have this opportunity.

Speaking of youngsters; this is a fine ballet to use as an introduction to dance for your kids or grand-kids, as they will enjoy it and relate to the fairy tale story line. The bad guys are like a bunch from the ’hood, and dressed in an obvious fashion; while the princess and her folks are spiffed up in grand style. A full orchestra in the pit keeps everything and every body gracefully moving along.

The performance is comprised of sixteen scenes, but in one act running about 1 hour 25 minutes. So short enough that the old folks and the kiddies can get through it with ease. The performances are at the Cobb Energy Performing Arts Center right near I-75 and 285. Check things out at AtlantaBallet.com