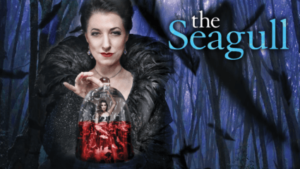 The Seagull
Serenbe Playhouse
through September 30, 2018

Anton Chekhov penned this work in the 1890s, which he thought was a comedy. It opened in 1896 in St. Petersburg to less than enthusiastic audiences. Chekhov pulled back and didn’t want it to get staged in Moscow. But, it was, and since then has gone on to play in venues around the world; regardless that the so-called humor is pretty dark, and often feels like an expression of life under Tsar Nicholas. It didn’t dissuade Chekhov from sticking to his writing and his second work, Uncle Vanya, was even more widely categorized as a comedy.

The play has been reworked many times, including an adaptation by Simon Stephens in 2017. This one is the adaptation of Yale graduate, Elizabeth Dinkova, who is also directing the production on the lake at Serenbe.

You meet up with an actress, Irina (Park Krausen), and her brother, Peter (Allan Edwards). Her daughter Constance is played by Maythinee Washington. A high end writer, Boris (Lee Osorio) enters into the family of distress and dysfunction. The other performers are Skye Passmore as Simon, Shannon McCarren as Nina and Brooke Owens as Masha.

The show is about these folks trying to deal with life, when life sometimes feel like something one might like to avoid. The seagull is an example of a creature who could be dead yet survive and mature. Not a likely situation for mere humans back in Mother Russia.

It is performed well and energetically, albeit is certainly not for the kiddies nor the faint of heart viewers. But, it is a Chekhov work. For info visit website at SerenbePlayhouse.com