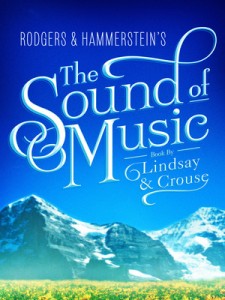 The Sound of Music
Fox Theatre
through March 6, 2016

Rodgers and Hammerstein fashioned The Sound of Music from the memoir of Maria von Trapp, and a film about the life of the von Trapp family which came out in 1956. While of the play may not be totally factual, it is still a compelling production in some respects and second generation von Trapps are still taking to the stage. The story line is loosely based on the story of the von Trapp family of Austria, and their exit from their Austrian mountain village in the face of the Nazi occupation.

This final opus from Rodgers and Hammerstein was first staged 50+ years ago and was a box office smash. But, Mary Martin and Theodore Bikel had the leads and they could make anything fly. You know The Sound of Music and Do-Re-Mi; and if you saw the movie you have in your mind’s eye Maria twirling around on the mountain side as she belts out The Sound of Music.

This production, directed by Jack O’Brien, features a full orchestra in the pit, and some fantastic sets which take you to the Captain’s mansion in the hills of Österreich. Mother Abbess’ (Ashley Brown) rendition of Climb Ev’ry Mountain brings down the curtain in Act I. Ben Davis plays Captain von Trapp, and Maria is played by Kerstin Anderson. Merwin Foard as the egocentric Max Detweiler provides the comic relief in the show, while the seven young performers delight the audience with their presence and singing.

As an old geezer, I always seem to take some offense at seeing the Nazi uniforms and symbols in Act II. But then, I never much cared for Springtime for Hitler, either. The audience did have some youngsters in it, but it was a school night. Not sure how easily one explains WWII to the kids of today. But, if you liked the show and/or the film then you’ll enjoy this performance.

For more info and tickets visit FoxTheatre.org And if you can figure out how to Marta to North Avenue, it surely beats getting “had” by the NYC parking fees.