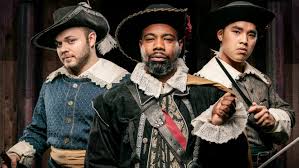 Alexander Dumas would probably have enjoyed this staged telling of his famous tale. D’Artagnon (David Sterritt) takes off for France to become a proud Musketeer. The tale is how he gets involved with Athos (Glenn Lorandeau), Porthos (Charlie T. Thomas) and Aramis (Ryan Vo) as they fall into the evil doings of the nasty Cardinal Richelieu (Matt Nitchie) who is the power behind the throne and the Grand Manipulator.

As you know it is a story a great intrigue, personal enchantments, and loads of personal conflicts being resolved at the end of a blade. With a cast of about 18 players and some of the best fight scenes you’ve ever seen, the tale unfolds in two acts but ends with One for All. Better than many contemporary political scenarios.

The athleticism of the players in fantastic, as they move through the fight scenes directed and choreographed by Drew Reeves with Mary Ruth Ralston acting as Fight Captain.

This is one truly intriguing saga, staged to perfection in the Tavern Playhouse. Fear not, for they also have a good kitchen with some fine pub grub and a pint or two as needed. It is open prior to curtain time so you can dine and watch, and go back at intermission for some goodies. The Tavern is located at 499 Peachtree Street and there is limited on-street parking. But fear not; park across the street in the hospital garage and when leaving, show them your ticket stub and they discount the rate.

If you have some youngsters you may wish to introduce them to the world of The Bard with a visit to one of their shows. More info easily available at ShakespeareTavern.com