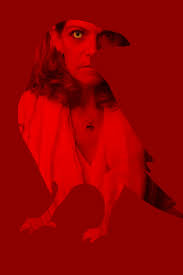 The Thrush & The Woodpecker

Another of the Steve Yockey plays opened at Actor’s Express and this one will run in rep with another one of his, Blackberry Winter, which is a co-production with Out of Hand Theatre. This is pretty much a standard Yockey opus.

We meet a cast of three players. Stacey Melich starts the show as Brenda Hendriks. We get the impression that there may be some marital discord between her and her spouse, Robert, who is off working in Alaska. As we sit there, we wonder who or what he may be working on up there.

Matthew Busch plays Noah Hendriks, a college senior who just got kicked out for some inappropriate activities. He’s a bit of a disappointment to his mom; but then we all know that we can be disappointments to family members, or the other way around.

The third player is Kathleen Wattis Kettrey who comes to visit as Roisin Danner. Roisin is an unannounced visitor, and could possibly be unwelcome by one of the Hendriks. And the story of the play is about what Roisin brings with her from days of yore, and how each of the women choose to deal with certain truths.

The reference to birds is a Yockey supernatural infusion designed to possibly help one rationalize some fairly irrational matters. While things start off in a reasonable manner, they’ll hardly wind up in the same mien.

The show runs about 75 minutes with no intermission. For more info and times and tickets just visit Actors-Express.com