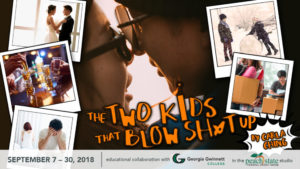 The Two Kids that Blow Sh*t Up
Aurora Theatre
through September 30, 2018

Carla Ching is a master playwright who has quite a track record. A native of LaLa Land, and of Asian-American background, she put this one together telling the tale of two young Pan-Asians who move through lives together and apart as the times change.

Pam Joyce directs this show which is set on a pretty stark set; but it moves around and works quite well, as we know, The Play’s the Thing. The young Diana is played by Vivi Thai, and the boy/man is played by Jack Ha. Allegedly she may be of Chinese descent while he is of Korean. That comes out when he can’t read Mandarin. But, we meet up with these two when they are in their teens and when they are in their 20’s and 30’s. Maybe their parents don’t see the glue which binds them, and only concentrate on the differences between them. But. In the end, it is the two of them who have to make their own decisions and run their own lives. In one line they even bring up the Chekhov type of problem, but life moves on; and neither is harmed in the end.

The show runs about 90 minutes on the black box stage as part of the Harvel Lab Series, and it is loaded with expletives; ergo maybe not for kiddies or Ms. Prim. But, is in the language of today and WTF, you have to understand where they are coming from. You need to pay attention and think about what you see, for they segue from being in their 30’s back to their teens, then older, etc.

The Aurora is located in Lawrenceville, with free garage parking adjacent. It is a very well done show and the type we need in these days. More info at AuroraTheatre.com