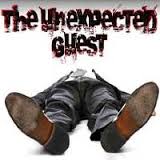 Agatha Christie’s play is set in South Wales, at the Warwick’s manor. On a dark night a stranger runs off the road near the house and comes up to enter, only to find the Lord of the Manor dead in his wheelchair, and his wife, Laura (Emma Green) standing in front of him holding a gun. It would look like an obvious murder scene. Were it not one by Agatha Christie.

The dead chap was a sort of meanie who liked to shoot various animals as they passed by his French doors. We never get to meet the deceased, although we do meet his wife mother (Pat Bell), weird son (Dillion Everett), strange care-giver (John Coombs) and the constables.

It is one of those where clues keep coming into focus, suggesting that somebody is the killer. Then other clues show up, sort of in the nature a red herrings. The stranger, Mr. Starkwedder, (Brandon Michael Mitchell) gets deeply into the family matters as well as some intrigues.

Directed by Liane LeMaster and with a nice set by Harley Gould, the cast of 9 players pull you into the story with great aplomb. You think you have it figured out. But, . . . maybe you need to think through it again.