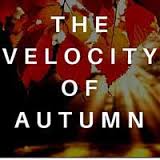 The Velocity of Autumn
Out of Box Theatre
through March 18, 2017

Eric Coble has penned quite a few works.  This one is enjoying being staged in a fair number of local houses.  It had a short run in NYC about 4 years ago, and one of the issues in some reviews was that whoever was playing the lead looked too young for the character’s age.

Here too, we find Dianne Butler taking the stage as Alexandra, the 80 year old widow living in Brooklyn.  She’s going through daily thoughts of how she may shuffle off her mortal coil.   She’s got three offspring, and two of them would have her sent off to an ACLF.  If you’re under 39, that acronym means Adult Communal Living Facility.  It is not at all what she wants, and she’d rather blow up the building and all that’s in it, then get dragged off to God’s Waiting Room.

Her flat is on the second floor of the building, and her son, Chris (John Stanier) shows up one day as he climbs up a tree near the living room and crawls through a window to visit the mother he’s not seen a in quite a while.  Chris lives on the west coast, and Mom figures he got called to respond by her other son and daughter who live near her, and who she’ll not let anywhere near her living space.  She’s prepared to defend herself and her space with no holds barred.

The play is a one act work which runs about and hour and a half; and what is really amazing about it, is how this lady can recall every one of her lines, as she’s center stage for every minute.   This show is directed by Carolyn Choe, and is indeed thought provoking.   You can truly understand Alexandra when she let’s Chris know that, for her, death could be the ultimate stress relief.

This may not be the best show for folks going through some of the same situations; but while we know that life goes on, we also know that at some point it must end.   Of course, we know that nothing is certain other than death and taxes.  We can only hope they come in that order.