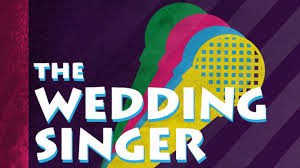 The musical adaptation of the 1998 film hit the boards about 2006 and has been tweaked and played around in many venues. The score is by Matthew Sklar and lyrics by Chad Beguelin. This production is directed by Jessica de Maria, choreographed by Ricardo Aponte and with a live band under the baton of Paul Tate.

The story is one of those love found, love lost, love sought and lost regained. There is a 3 player band whose gigs are mostly weddings and bar mitzvahs. Robbie (ChasePeacock), who is the lead singer is planning to wed the lovely Linda. But things don’t work out quite so well. Robbie is living in his grandmother’s (Katherine Michelle Tanner) basement, and isn’t well financially. He hits the dumps when Linda (Alison Brannon Wilhoit) pulls out of the pending wedding. Then Julia (Rosa K. Campos) becomes the apple of his eyes but there’s a problem there as well, for she is being sought after by a wealthy financial guy, Glen (Maxim Gukman), who like many today can tell you it is all about the greed. Or maybe they should say the greed.

Syke Passmore and J. Koby Parker are the other two in the band, and they play off on and with Robbie through the two acts. There is plenty of dancing and singing as they move through plans for stag parties and bachelorette bashes, and they grab your eyes and ears with 22 really well done numbers, which could serve a instructions for those dealing with certain issues and/or life in general in these days.

The set works very well and segues easily into many scenes as the story is told. It is an enjoyable evening and nobody gets killed, so it is a lot better than watching the news.
Atlanta Lyric Theatre is just south of Marietta Square and easy to get to with plenty of free parking and good seating throughout the house. More info and tickets at AtlantaLyric.com