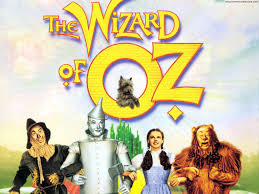 It’s been more than a decade since the Wizard came to the Fox, and while one might think, at first, that it’s just one of those things for the kiddies; they’re sooooo wrong.

This version has added some new tunes by Andrew Lloyd Webber and Tim Rice. And the technical aspects of the production are what sets it apart from anything you’ve seen before.

As Dorothy (Sarah Lasko) sets out on the yellow brick road she meets up with the usual characters; the Scarecrow (Morgan Reynolds), the Tin Man (Jay McGill), and the cowardly Lion (Aaron Fried). Mark A. Harmon urges her on as Professor Marvel, and he doubles as the Wizard as well.

Shani Hadjian plays the evil Ms. Gulch as well as that wicked witch who wants those red shoes that Dorothy is wearing, and will stop at nothing to obtain whatever she desires. Sort of like a politician of fiction. The lovely Glinda is played by Rachel Womble.

Of course, Toto, steals the show every time he comes onstage. I guess there is a reason why most actors never wish to share the stage with a child or an animal. Same as when Sandy steals the show with Annie.

The cast includes about 20 more players who are the Munchkins as well as the Wicked Witch’s army crew. And what really put this one over the top is fantastic costumes, great choreography, a full orchestra in the pit, and sets and props that are totally Broadway quality. And as we go on in years things evolve and what we have today is technical abilities that just didn’t exist a decade ago.

Wherever you are sitting in the theatre, you feel as if you are right there in Kansas or Oz. What is so wonderful is that this is just not for the kids. All the AARP card holders enjoyed it as much as they did. I don’t care if you’ve seen the show before, you haven’t seen it like this.