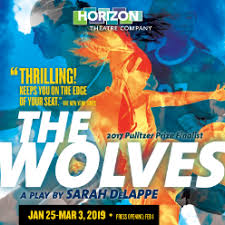 The Wolves
Horizon Theatre
through March 3, 2019

This work by Sarah DeLappe has been nominated for quite a few awards and has played in quite a few highly regarded venues. It is a tale of a group of female teenage students who are members of their high school team. Although they are a team, they are also individuals and going through their mental and physical travels to find themselves.

The one act play takes place on an indoor practice field and each comes out to others as they kick around doing their prep for some competition they want to win. The girls don’t have names, as they just use their player numbers shown on their shirts and jackets. But, each has an impression of every other team member. The issues deal with financial concerns, grades, acceptance by people of other race and nationality, and sexual explorations.

It is not for those who would have a problem with the use of the F-word as the universal modifier. But, that is really how the kids may speak on the street these days. It is a very high energy show with a cast of ten players, and nothing like anything you’ve seen before. It is playing to sold out houses, so get more info and tickets at HorizonTheatre.com