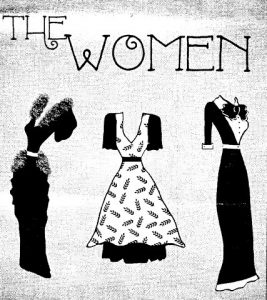 The Women
Act3 Playhouse
through October 1, 2016

Clare Boothe Luce had quite a life. Possibly better known for being a suffragette than a playwright, she had been deeply into politics and journalism. Her husband controlled many major publications including Life Magazine, and she served as Managing Editor of Vanity Fair. She hobnobbed with the NYC upper class and the ladies who lunched. When Eisenhower became president she was appointed Ambassador to Italy and later on to Brazil. Before WWII, in 1936, she wrote this play about a group of upper class ladies who were, on the surface, good friends. And that’s where the tale starts to wind.

Johnna Barrett Mitchell directed this all-female cast of more than 18 players who can dish the dirt, twist the facts, and try to get on with life as it was for them all. Janie Young, Sarah Humphrey and Eileen Magee Hilling play three principal roles, while the strumpet is played by Jessie Kuipers and the nose-in-the-air Countess is Phyllis Giller.

The underlying story line is about a woman’s place in society in those days. For it was a time when women got married, had children, cooked food, and did homework. As late is the 1950s in schools across America the boys all took Shop classes while the girls took Home Economics. It wasn’t until Rosie became a riveter that doors started to really open more.

The show is probably more of a chick thing than a guy opus. But, if you can remove yourself from the sports and political fertilizer out there, and try to see things through the eyes of another, then you’ll get it.

Act3 is located right in Sandy Springs behind Trader Joe’s and easy to get to free parking. More info and times and tickets at Act3Productions.org