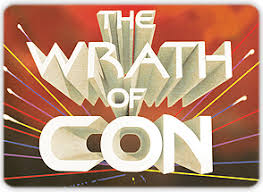 They’re reprising this one, and to full houses who are going bats (pun intended) about the show. The cast of six players are really putting their all into this one, and the action never seems to abate.

Meg Ansteensten, Anna Giles, Ronnie Johnson-Lopez, Whittney Millsap, Maged Roushdi and Taylor Roy get in your face as a bunch of nerds who want to be what they think they may be, or want to be; regardless of how they see themselves, or think or know how others perceive them.

It may bring to mind gatherings such as the Wrath of Kahn, and some Star Wars scenes; but this isn’t either of those. It is taking place in a hotel room where the Con is in sessions and you can be glad you aren’t in the room next door. Scott Warren has directed this high energy meeting of the minds, or whatever . . .

The back-lit imagery of the evil one, sets the route to be soon traveled, and they all take off on it. Most of the audience on opening night probably had seen this one before at Dad’s Garage and they couldn’t control their excitement as the tale of nerds unfolds. It may not be quite the show for a lot of the AARP crowd or some Ms. Prims, but if you want an evening of very unusual entertainment then you’ll dig this one.

Easy to get to, free parking and plenty of goodies available. More info at DadsGarage.com