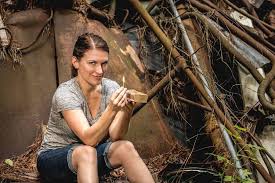 Throw me on the Burnpile and Light me Up
Aurora Theatre
through October 1, 2017

Prize winning playwright Lucy Alibar wrote this see-through mirror of memories and actually took it to the stage herself a year ago. It is both an honor and a delight that the Aurora has now brought it to their stage with Taylor M. Dooley as the young girl.

She’s part of a tight-knit family down in the Panhandle near a watermelon farm. And she shares with us her memories of growing up there with some weird animals as well as a not-your-usual kind of family.

Her father is a lawyer who just does pro-bono work for clients charged with capital offenses. It’s not because the family is well off; it is perhaps more because of his basic belief that every person deserves a defender, and it validates his being when he is such.

The nameless girl we meet shares with us her stories about her mother, usually referred to as Boss Lady, and her brother who is referred to as The Son Of, while her father generally refers to the girl as Boss. Although they live in a deep southern part of the Bible Belt, father is an atheist who has no love of any deity, albeit he is one who believes in doing what is right.

The girl tells about her life with her family as she grew up, and also the problems encountered in her primary grade years with teachers and classmates. And the set is primarily a burn pile, where the father tosses all the artifacts which remain after a client is put down, and the locals line up for the free fries at the local fast food joint.

I have to tell you that I am not a great fan of one act shows which run about 90 minutes, after I have driven 60 to get there; nor of monologues which sometimes make me feel like I have been attending a lecture. But, this is not that sort of show. Taylor absolutely captivates the audience and while the story is one with pathos, there is humor aplenty in it.

It is a terrific show directed by Rachel Parish, with a backdrop set designed by Elizabeth Jarrett. I stand in wonder of actors as talented as Taylor, who can recall 90 minutes of lines, while I have trouble remembering where I may have parked the car. This is an excellent show. More info at AuroraTheatre.com