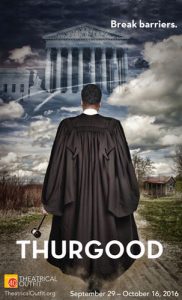 Thurgood Marshall, born in 1908 in Baltimore became the first black Associate Justice on the US Supreme Court, when LBJ appointed him in 1967. Before that he had been deeply involved with civil rights, worked with the NAACP, and won his case in Brown v. Board of Education which theoretically got rid of segregation in public schools. Albeit took a while to be fully enforced.

This is an exceptional work by George Stevens, Jr. who started the Kennedy Center Honors and founded the American Film Institute. This play first hit the stage in 2006 with James Earl Jones playing Thurgood. While he is a wonderful actor, there is nobody who may ever have played the role who could have done a better job than that done right here in Atlanta by Geoffrey D. Williams.

I usually don’t get excited about monologues, as they’re a little short on sets, cast, dance, music, etc. But, when you run into one like this, which captures your senses from the get-go; it is a rare treat. Directed by Eric J. Little, the show is staged as Justice Marshall addresses the people at Howard University and relates to them (us) the story of his life. Growing up in Baltimore, deciding to practice law, his marriages, personal habits and some of the fights he got into along the way.

He inherently knew that the law wasn’t always about truth nor justice, and that the Bar was an old boys club, for lawyers are one of the few remaining guilds in western societies.

The show opened to a pretty full house, and it was comforting to see that the patrons were just about 50-50 by ethnicity, so we were all people with a common desire for our lives and families. You could not leave the theatre without thinking how much you would have wanted to have actually had the honor of meeting Justice Marshall. He served on the Court from 1967 to 1991, and we lost him 2 years later.