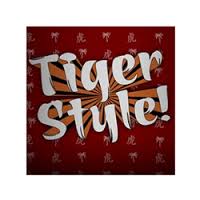 Tiger Style is a most unusual and hilarious work by an Eli alumnus, Mike Lew; the same playwright who created Bike America, which won the Kendeda Competition in 2013 and played here on the Hertz Stage. This work may in some ways be a reflection of aspects of his life in these States, growing up in the stereotypical second generation immigrant family, dealing with common conceptions of Asians by non-Asians, attending Yale and Juilliard, dealing with normal family stress, job stress, and actually marrying a playwright as well.

This young man is brilliant. And his way of weaving humor into darker scenes is great. A wonderful cast and crew has brought this premiere production to us and we must not only stand and applaud Mike and the company, but Susan Booth for having the cajones to put this one on the main stage, where I’m certain it will play for many a year.

Mike’s friend of many years, Mortiz von Stuelpnagel came to town to direc,t and the set and projection work is Broadway quality. Jon Norman Schneider is the motivating character, Albert Chen. Albert works in the IT field, and feels that he is getting passed over for improper reasons when that idiot, Russ the Bus (Bobby Labertino), gets tapped for a promotion, when it was Albert who was doing most, if not all, of the work that Russ gets credit for.

Ruibo Qian is his sister, Jennifer, who is a physician, but not getting everything she would wish for in life, from her current life. Their parents always wanted them to become successful professionals and move up the ladder of life. Sound familiar? Same as the Jewish families where the immigrant parents worked in mills and were wagon peddlers, so their children could go to college and become doctors and lawyers, so that their grand-children could become flower-children and the circle of life could go on.

Francis Jue plays their Dad, but he also appears as Chinese Maoist guard, a weird visitor in the park, Albert’s boss at the IT firm, and whatever . . . . He is a riot, and has the moves, appearance and voice to help take this one to a TV series with the rest of the cast.

Emily Kuroda plays their Mom, and also comes on as a shrink, a Chinese yenta, and old aunt and whatever . . . I lost count of all the ensemble parts. Leave it to say that 5 players deal with about a dozen roles.

The story line is one about how Albert and Jenn decide to take control of their lives and stand up for what they believe. It’s just that standing up doesn’t always work out quite the way one might hope for. If they are not going to fit in, here in America because of their cultural appearances; then maybe they’ll strike it big time in China where they are anxious to have more doctors and IT specialists. Oops. . . Neither of them can speak a word of Mandarin or Cantonese. So these strange Americans become strange Chinese. Then they have to find a way to reverse things again. Maybe they have a chip in their shoulder.

This is a VERY good production and one that is unlike any you have seen before. Talent, style, vigor and humor merge to produce a wonderful evening. For tickets and more info just visit them at AllianceTheatre.org