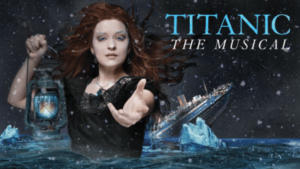 Serenbe Playhouse has already created a history of totally enormous productions, so while this one may be expected, it is nothing like what you might imagine. Directed by founder Brian Clowdus, the Titanic is staged on a lake, and the ship is four decks high and seems to be almost as long as a real ocean liner.

The orchestra of 11 players under the baton of Chris Brent Davis, is in a facility built for them on the other side of the lake. They perfectly work through more than 30 numbers as the tale of Titanic portions takes place. This is a production where every actor is first class and the costumes and choreography never stop your enjoyment of a true tale of great remorse.

For it was in April 1912 that the largest passenger ship in the world was on its maiden voyage from the UK to New York. You know some of the story, as it ran into an ice berg which ripped the ship apart and caused it to sink within a couple of hours in the middle of the night. The majority of passengers could not be saved and 710 were saved, 1514 were lost. About 80% of all male passengers and crew were lost. A lot of public outrage erupted and many of our generations may not know the whole story, including exceeding normal at-sea speeds, moving the route further north to shorten the journey, receiving several warnings of danger on new route, failure of old radio signals and/or use of Morse code to reach recovery ships, some of the world famous multi-millionaires who had been on the ship.

The setting is unique and incredible. The set is built on the water, and you see it move about a bit. The lighting from onshore towers keeps your view quite clear and the sound system has every player-singer fully heard. While Act I deals with the pre-boarding and the different amenities of the first class as compared to those on lower decks; Act II deals with the final day of the trip and you can’t miss one second of it. I could say it is as good as any show in a major house; but that would not do it credit. It is a LOT more than almost any other show you’ve ever seen. It runs about 150 minutes with one intermission, and may not be for the very young; but will wow the rest of us.