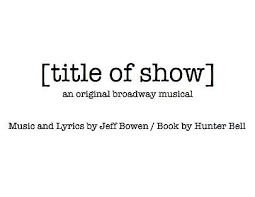 The title shown above is really the name of this show. It is about a couple of nobodies in NYC who want to get somewhere in the theatre business. With only three weeks left before the submission deadline for the New York Musical Theatre Festival, Jeff (Jeff Cooper) and Hunter (Blaine Clotfelter) set out to put together some story line and numbers. The show you see them trying to make, is the show itself.

In any of the cultural arts, be it theatre, dance, painting, writing or whatever, the top of the pyramid is maybe 5% of those involved and they control more than 90% of the revenue; for in our society it is celebrity that sells. Ergo, if your name goes above the title, be it play or book, you are in top position.

These two nobodies bring in a couple of women to collaborate and hopefully perform with them. Heidi (Gina-Ann Riggs) and Susan (Becky Ittner) get into it deeply as the four of them try to move forward through differing points of view. It is always a question whether to make changes, or not. The music is provided by Shane Simmons, who does great onstage on the keyboard, and gets into the act after a while.

Directed and choreographed by Zac Phelps, this version of the show runs in two acts and several musical numbers; most remembered being about how they would all prefer to be nine people’s favorite thing than a hundred people’s ninth favorite thing; since that 9% spread the word and build audiences.

The show has played in off-Broadway houses and won an Obie. It has also played overseas in several countries; which is a lot more than Hunter and Jeff may have anticipated. The theatre company plays at the Lyric Studio on Powder Springs Street, off of Marietta Square. Easy to get to, but be careful not to park where they boot or tow. The show does use many expletives, so Ms. Prim may be thinking WTF? But get more info and tickets at MariettaTheatre.com