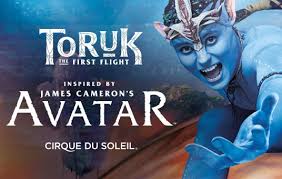 Based to a degree on James Cameron’s Avatar, this is not your usual Cirque production. It is being staged at the Infinite Energy Arena which is located on Sugarloaf Parkway just west of I-85. And it is so hard to imagine that they play for only 5 days, when the staging looks like something that probably took 3 days for move-in.

The story line is pretty irrelevant. It is about some blue skinned humans who want to save humanity, and they need to find the way to obtain the necessary access to pandora. Or, maybe I got it a bit confused; but the plot makes no diff, as you will not quite get a majority of the lines. Some come through as spoken in Klingon. So, just sit back and say WTF, and let your eyes and ears feast upon the production.

Unlike most other Cirques, this one has very little acrobatics. No high wires, no slack wires, no trampolines, and no jugglers. The action is primarily a lot of jumps and somersaults, and many rope climbs and swings. However, the costumes are incredible, and the set is deluged with loads of computer generated projections which surpass anything seen before. You feel as if you are sitting on the set of a Sci-Fi film being made. And, the music, while canned, is the motivating force to get the blood flowing as the story develops.

One questionable aspect of the production is inviting the audience to use their cell phones to respond to an app to permit them to be used as flickering lights during the second act. I, for one, don’t see that. It inspires those who have no sense of politeness to sit through the show messing with those phones and recording images while they sit in front of you. I hope those folks don’t try to attend The Fox or go to the Opera.

So, . . . having said all that, I need to add that it was a wonderful performance. The choreography, music, sets, costumes and puppetry which is very much like what you saw in Lion King, are all first class. But you have to hurry, it closes Sunday. Info and tickets at CirqueDuSoleil.com