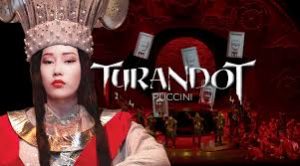 Turandot
Atlanta Opera
through May 7, 2017

Turandot returns to the Cobb Energy after 10 years.  When they presented it there in October 2007 it was their first production there after leaving the Fox.  Turandot isn’t a Carmen or La Boheme, in that there is really only one memorable number.  But, the story is weird, as are most operas, and the costumes, sets and props are a treat to the senses; along with the score which was mostly by Giacomo Puccini and based on Carlo Guzzi’s play of the same name.

It must have really impressed the audience when it premiered at La Scala, with all those weird Asian types.  But the, most operas have weirdos, people dying, and love and stress as major themes.  The opera is staged with more than 200 people involved on stage, in the pit, and in support.  And, it is sometimes more like a three ring circus, than just a strange love story.

Turandot (Marcy Stonikas) is the cold hearted princess daughter of the Emperor of all China.   Her dad wants her to get married, but she is seriously disinclined.  She has it enacted into law that any suitor may claim her if he can answer three riddles..  Get one wrong and he loses his head.   It’s been a tough year so far and 13 suitors have gone to the cemetery.   Enter a stranger (Gianluca Terrnova), a prince of someplace whose name is unknown.   He demands to be put to the test, and without having to call a friend or poll the audience he gets all three riddles answered.   Turandot is really ticked off.    Stranger says that if she shall pronounce his name before the dawn that he will forfeit his life.    So Turandot declares that nobody in Peking may sleep that night.  Everyone is put to the job of ferreting out Stranger’s name on pain of death.   Talk about a sore loser!gy

On hearing of the edict, our noble suitor sings Nessun dorma (Nobody sleeps) which is the centerpiece of Turandot.   While he sings that victory shall be his, he winds up spilling the beans to Turandot; who now has the power to destroy him.   In the process Liu (Kelly Kaduce) who is enamored of Calaf, but knows that one way or another she can’t win, takes a dive.  But Turandot becomes warmed by love of, and for, Calaf and joins with him to unite in matrimony, spare the citizens of Peking, and restore peace to the Empire.   Nu?  It’s a fairy tale set to music?

The three clownish figures of Ping (Daniel Belcher), Pang (Julius Ahn) and Pong (Joseph Hu) are deliberately exaggerated so that at times you think they are Larry, Moe and Curly.  They are terrific and they are the glue that sometimes bonds this opera together.

It may sound somewhat Trumpish to say it, but this production, directed by Tomer Zvulun with Arthur Fagan conducting, is in every way as good as what you might see at The Met.  First class in every aspect.  Cobb Energy Center is easy to get to near 285 and 75, and easy parking.  More info and tickets at AtlantaOpera.org