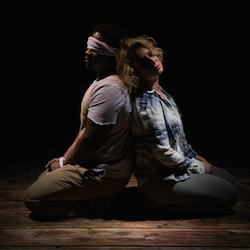 Two Rooms
Out of Box Theatre
through February 27, 2016

This little black box theatre in Marietta works their buns off staging more than a dozen shows a year. This month they present Lee Blessing’s work about a American taken hostage by Islamic terrorists in Lebanon, in the 1980’s.

It is set at the home of Michael and Lainie Wells. Michael was working as a teacher in Beirut around the time of the bombing of the American Embassy in 1984. He was taken captive by insurgents and held as a hostage. We meet Michael (Olubaja Sonubi) in his detention area. He’s blindfolded, in ragged attire, his wrists bound, and in a living hell. He thinks about Lainie all the time and what she must be going through.

Candace Mabry is Lainie, and she’s taken his room in their home and turned it into the sort of dung heap that she imagines Michael to be housed in. There is nothing in the room other than a thin pad on the floor. She’s heartbroken, sad, withdrawn and mad. Mad both with the rebels who stole her Michael and also with the government which seems to have done nothing to get him back. The government’s m.o. with terrorists was never to pay ransoms. In fact it is against the law for a citizen to even offer to pay.

She gets visited by a handler from the State Department, Ellen VanOss (Aretta Baumgartner), who is very business-like, and is just visiting to give out as little info as possible, while protecting all intel sources. One might think she is telling lies, but she is just doing her job. She is really upset that an investigative reporter, Walker Harris (Aaron Goodson), is becoming as nosey parker. He wants to get some info from Lainie, but Lainie is disinclined, and Ellen is trying to shut him down.

The stage is stark, except for the floor pad, but there are some projected images that introduce the show with flowers such as Georgia O’Keefe might have done, and then transferring to the war zone in Lebanon, to atrocities being committed and to news reporting. Joel Coady directed these four fine actors in this VERY stressful opus. It is a real sturm und drang production with plenty of screams.

If you, or anyone you know, has endured anything remotely akin to this story, you will find it difficult to take. But, it does deal with what governments do, and what human nature is all about. If you think that our government is always open and plays by the rules; think about McCarthy in the older days, and Gitmo in these days. For my political science prof taught us years ago that all governments lie, including our own, and that what is “right” for any government is what it deems to be in it’s best interests.

And the treatment that you hear of and see being delivered by insurgents does make one recall The Rage and The Pride by Oriana Fallaci, and her beliefs that the Crusaders screwed up by not eradicating Islam. While she was a brilliant journalist, the truth is that Muslims are people, just as you we are. It is the nut cases who run some of the countries and terrorist groups which generates a general distrust of those we do not know. Will it change in our lifetimes? Same chance as we may have of winning a lottery. . . .

Out of Box is located on Cobb Parkway a little south of the Big Chicken. Easy to get to, free parking and good coffee. For more info visit them at OutOfBoxTheatre.com