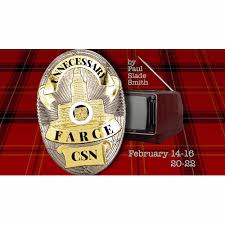 Do you like BritComs, did you enjoy The Three Stooges, and are you a fan of the farces of yesteryear penned by Molière? If you answered “yes” to any of the questions then you will thoroughly enjoy this romp.

The plot is totally insane, so don’t worry about it. Just sit back and laugh as two totally incompetent cops, Eric (Freddy Lynn Wilson) and Billie (Katharina Fox) try to take down an allegedly corrupt town mayor (Steve Pryor) and use a sexy vamp (Julie Turner) to lure him into a bugged hotel room where she plans to elicit his confession before the surveillance camera.

And that’s when everything starts to go from slightly errant to a total train wreck as far as the cops are concerned. It seems that the mayor’s security guard (Jerry Jobe) may be in on the scam and that the Mafia in this episode could be a Scottish Clan (with a C not a K). Todd (Neil Ramsay) is the nasty who might understand if we were to tell him Yer bum’s oot the windae.

Nothing is what it seems to be, and in the process of coming apart at the seams it provides riotous laughter for all. You’ll be surprised with the reaction of the Mayor’s wife (Diane Dicker) when she shows up looking for him. What is really captivating is the athleticism of the players; especially Katharina Fox who plays the nit-wit cop. She and others jump, roll and cavort between two adjoining hotel rooms and you’ll enjoy every minute of this one.

It does seem so poignant in these days are political scheming headlining the news, and people who may be in government but have an IQ slightly lower than a turnip. They play just these two weeks, and it is a very well done under the direction of Julie Taliaferro. The theatre is easy to get to with good seating and plenty of treats. More info at CenterStageNorth.org