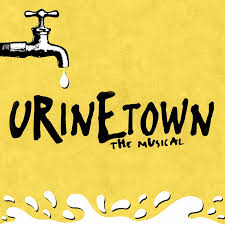 Urinetown, the Musical is a play within a play, where the narrator works the house as well as interacting with others in the cast of 18 players.  It’s a mighty big production for a smaller local theatre company.  But, they pull it off with great aplomb.

Even if you’ve see the show before, this time you’ll start to understand things a bit differently.  Especially in relationship to current political and economic activities.  It isn’t actually about the pay potties in Manhattan years ago, nor the outsourced parking meter enforcement in Atlanta that we hated.  It’s about big business and politicians for hire.  Gee. . . . how things have changed in our oligarchy.

Barbara Cole Uterhardt plays Office Lockstock, and she is having a ball doing so.  Caldwell B. Caldwell is the CEO of UGC, the firm which manages the pay potties.  UGC is the logo for Urine Good Company.   You’ll love the puns where we have officer Lockstock assisted by officer Barrel (Nathan Tyler Hesse), and other such lines.  Little Sally (Summer McCusker) is sort of like an Annie type as she wishes things could be better for everybody, not just her.  And you’ll love meeting   Caldwell’s daughter, Hope (Leah Parris), who might possibly bring to mind some folks you’ve seen in the evening news in recent months.  But, she was graduated from the most expensive college in the country, and she winds up having a brain as well as a heart, and the march goes on.

Zac Phelps is Bobby Strong, who starts the revolution, and Lilliangina Quiñones is the meanie Miss Pennywise.  Liane LeMaster directed this large scale production and the live music combo is under the direction of Laura Gamble.   You have to admire the ability of this small company to pull off a production of this scale, and do it so well.  More info and tickets at Act3Productions.org