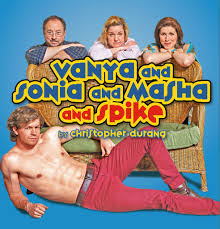 Vanya and Sonia and Masha and Spike

It is a significant example of the theory that great minds may think alike, and this collaborative partnership between the Aurora Theatre and the Horizon Theatre, permits each to produce a first-class comedy by Christopher Durang.

It brings to mind the works of Chekhov. Especially the three sisters and the cherry orchard. When this show opened on Broadway it won the Tony for Best Play in 2013, and it’s a non-stop riot. Set in a small town, you meet a brother and sister who live alone in the family home. Grumpy old geezer, Vanya, is played by William S. Murphey. He’s a little difficult at times. Just ask his sister, Sonia (Lala Cochran), but not while she’s having coffee in the morning.

They’re half-siblings who seem to live in different worlds most of the time. The maid is Cassandra (Denise Arribas) who is also a psychic and purveyor of doom when it suits her to be so. And she’s very effective in what she does; albeit culinary arts are not her best talent.

Their sister, Masha (Tess Malis Kincaid) comes for a brief visit. Masha is an actress who has followed her passion, made some money, and helped out financially, if not psychologically or physically. Now that the parents have passed on, she wants to reassess her relationship and she knows who is most important to her. She’s thinking about selling off the family home and moving on in life.

She shows up for the weekend with her boy toy, Spike (Edward McCreary) who provides the eye candy for many in the audience. Spike may not necessarily share Masha’s attachment; and he’s also a few years younger than her.

The other bit of discourse is the neighbor girl, Nina (India Sada Tyree) who wants to follow her dreams to act. But, Masha may not be the best advisor in that regard. All hell breaks loose when five of them get invited to a party that night and Masha wants to control the type of costume that each may use. After all, she has to be center stage.

Justin Anderson, directed this production, with the same superb set by the sisters Isabel and Moriah Curley-Clay that was used at the Horizon. This whole experimental collaboration is one huge success. Think about it. Folks out in Lawrenceville don’t have to schlep down to Little 5 Points. Each house saves money on costumes, props and sets. And once cast, the same players appear at both houses. Except for India, they all worked the stage at Horizon in May. As I opined then, there is absolutely NOTHING about this production which is anything other than 101% professional NYC quality; but at local prices. For more info and tickets go to AuroraTheatre.com