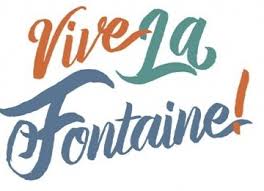 After a decade hiatus, Atlanta’s only French language theatre company has brought back this show to 7 Stages. However, due to the Corina Virus stuff the show is now canceled after today. The show is based upon some of the fables created in the 1600’s by French poet Jean De La Fontaine.

The cast of four great players presents nine of the fables, in a variety of styles. Some are done as if by marionettes, one on a toy stage, and some as ballet and tap dance sequences with musical numbers.

Four superb actors are so wonderfully fluent in French that you would think you are in a small theater on the rive gauche. They are really good to the high stepping ballet moves. You need to not only listen to their words but watch the facial expressions which communicate to well. Chris Kayser, Dionna Davis, Chloe Kay and Kevin Qlan are the cast of various characters and each is accomplised in acting, dance, music and total stage presence. Especially transmitting the humor to the audiece.

The show is now performed with some supertitles, but not to worry. It’s all about the stage presence and not the lines; so even if you don’t understand one word or French, you’ll still enjoy the show. It’s different, but it is enjoyable.

And to the cast and co-directors, Ariel Fristoe and Carolyn Cook, we applaud and say and end by saying très bon! Alas the show is now closed; but check in on them and when it comes back you and your little ones will really enjoy it. Website is TheattreDuReve.org