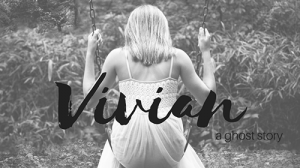 No, this is NOT about Vivian Leigh. This one-act play was crafted by Chase Peacock and Jessica De Maria, and is about a young girl and her family moving into a ghastly dreadful new home.

Vivian (Mabel Tyler) and her older sister, Chrissy (Brittany Ellis) are in the process of settling in, after the passing of their mother. And their father (Travis Smith) is trying to deal with the stresses of daily life as well. So many of us have been through this episode; but this time the tale moves along with a dozen numbers with music and lyrics by Chase and Jessica.

A young neighbor, James (Austin Taylor) shows up and offers help on the unpacking and setting up. And he and Chrissy find an interest in each other. But, something isn’t quite right. Is there some ghostly spirit still living with the family, or in the house?

The cast of four players is directed by Jessica and backed up by Chase Peacock on guitar, Devin Porter on the keys and Zach Beahan on the drums. The timing is right, since Halloween is soon upon us, and this may be one that gets played every October. There is some street language so may not be for little ones or Ms. Prim, and the show runs about 70 minutes.

The show is at the Lyric Studio Theatre which is the small black box stage behind the Marietta Theatre in the Square. Address is 12 Powder Springs Street. For more info check them out at AtlantaLyricTheatre.com