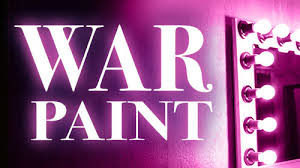 This musical about two leading ladies of the cosmetics industry is based upon a true story which was the subject of a 2007 film, The Powder and the Glory. It is about the rivalry between Helena Rubinstein (Mary Nye Bennett) and Elizabeth Arden (Pamela Gold)

Elizabeth Arden moved to NYC from Canada in the 1930’s, about the time when Polish immigrant, Helena Rubinstein emigrated; and both were intent upon making their names and their fortunes with their own branded products. It was a bitter rivalry and things got worse when their business-personal mates, Tommy (Lowrey Brown) and Harry (Brian Kurlander) each defected to the other side, and things started to get more difficult.

It was in the 1930’s when women were secretaries, not executives; when TV wasn’t yet a factor, and a woman’s persona was defined by her appearance. Especially when dining at the St. Regis with the hoi polloi.

In addition to a cast of 15 actors, there is a full band in the pit working through the two dozen numbers. The first act doesn’t really define the story, as there is so much more in Act II. For WWII is about to change the world of those days. And as Rosie became a riveter, both of the ladies stepped up to plate to help the women who were helping to serve.

There are underlying problems such as anti-Semitism, failure to comply with FDA regulations to make it known what compounds were in their products, how to hang on to product recognition while trademarks may not be the factor, but rather the colors and the names.

And while we often hear that especially in families there may be more that binds us together than divides us; you know that isn’t always the outcome. But, in the 1960’s when both of the ladies were to be honored for their achievements, they managed to discover their common interest and goal.

This is not one for the kiddies, as the story would be lost for them; and the running time is almost 2.5 hours. It is not Annie, or Cats, or the type of show where you will leave the theatre humming the tunes and wanting to sing the words, as it is a more modern approach. But, it gets the job done and with good costumes, choreography, music, voices and sets. More info at AtlanticLyric.com