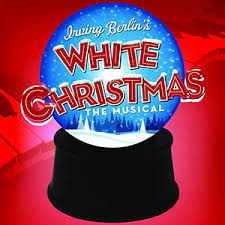 Irving Berlin’s White Christmas was a really fantastic film about the actors who worked to help save a country inn in Vermont for their former army commander from WWII. And it has been brought to the stage many times, with some tweaks and changes. But, the bottom line is still that good people can come together to do good things for others, and that the holidays are an inspiration to get things done.

Directed and choreographed by Randy Skinner, this hard working touring company of more than two dozen players hit the stage with great costumes, some incredible tap dance numbers, and neat sets and props. Especially in the final scenes when the climate change actually occurs up north.

The story is inconsequential, in that the songs and dance are what the play is about, and you may find that one or two numbers which were not in the original film have been added to increase the eyes and ears appeal. The grouchy old retired general is played by Conrad John Schuck. The two male leads are Sean Montgomery and Jeremy Benton; who play off against the “sisters” played by Kelly Sheehan and Kerry Conte. And this gang works through about 15 memorable standard numbers.

The show is playing to pretty full houses, so easiest way to get there may be by Marta to North Avenue station, and because of security clearance requirements, you might want to plan to arrive not later than 7 for the 7:30 shows. If you have your actual tickets ion hand you can get in faster at the side door on Ponce.

With all the “stuff” going on in our nation and the world, this is one that we can really benefit from. Two hours of total pleasure, nobody gets killed and no politicians. More info at FoxTheatre.org