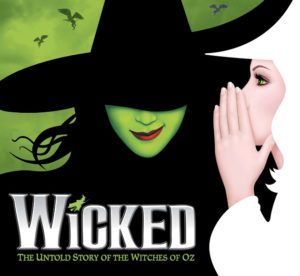 You know it is an audience magnet when one of the big touring companies comes to town for more than three weeks, when most of them are booked in for a 5-night run. And the opening night of Wicked played to more than 4,000 patrons, each of whom thoroughly enjoyed it.

With a cast of more than 30 players, a fantastic first-class set and props, live orchestra in the pit and superb lighting and imagery, the company moves through 20 numbers and delights young and old alike.

I doubt that Frank Baum could have imagined not only that his tale of the Wizard of Oz might be the inspiration for Gregory Maguire’s The Life and Times of the Wicked Witch of the West; but that the later revision would find it’s way to Broadway and become one of the highest grossing plays of all time. Right up there with Lion King and Phantom.

Directed by Joe Mantello, you’ll be engulfed in the tale, where Elphaba (Talia Suskauer) and Galinda (Allison Baily) get in each other’s faces. You know one of them had a strange birth defect and that caused her a lot of concern when interacting with others. Some of the other characters you will enjoy are that goofy teacher, Doctor Dillamond (Tom Flynn) , Madame Morrible (Sharon Sachs) and Fiyero (Curt Hansen). Of course you get to see those monkeys and some munchkins and even the Tin Man shows up in Act II.

It’s one of those where the audience yells, claps and screams out and at the end want to stand up and shout out CONGRATULOTIONS to all.