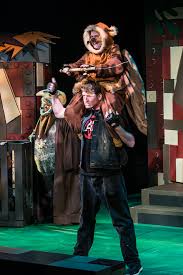 Dad’s Garage is possibly best known for it’s years of improv theatre. But, they occasionally delve into some pretty loony scripted works. And, this one is one of the biggest they have ever staged.

Presented as “A Parody Musical” it is a look at Star Wars from the viewpoint of the Ewoks, and is an non-stop riot for those who understand what came before. Book and some lyrics by Travis Sharp with music and some other lyrics by Haddon Kime, the show features a cast of 9 players in some very unusual costumes. If you weren’t deeply into Star Wars then you may have a bit of trouble trying to deduce WTF is going on. But, if so, just ask those nerds sitting next to you. They’ll explain it.

Karen Cassady plays Wicket, who is a small Ewok. Wicket is enamored of the Princess Kneesaa (Alyssa Engelhoff) but has a problem. Seems that size matters, and that’s a big problem for a little Ewok. Googie Unterhardt is a terror as The Emperor, whose theory is that everybody and everything is supposed to be his. I hope he doesn’t run for office here next time.

Some of the other Ewoks are there including Princess Leia (Eliana Marianes), Roadie (Reed Pendergrass), Latara (Alice Garriga), Chirpa (Joseph Ndoum) and Longray (Rickey Boynton). And the operatic number by Jayme Alilaw brought down the house.

No, you’re not going to leave the house humming the tunes, nor recall most of the words, but you are going to have a very unusual and enjoyable trip into the other world.   It is surely not for the wee kiddies nor the Miss Prims; but it is a very well staged production under the direction of Rick Lombardo. As he defined the show, “It is the Battle of Endor told entirely from the Ewoks point of view.”

Dad’s garage is located a little south of Little Five Points. You can ask your phone how to get to 569 Ezzard Street, or if you are some old geezer look at one of those old printed map things. More info and tickets at DadsGarage.com