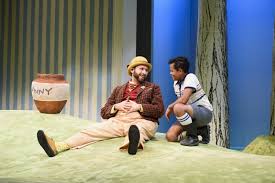 Due to public demand the Alliance has extended the run of this classic work to July 15th. It is a musical based on the story by A. A. Milne, and is produced in collaboration with the High Museum, which is hosting an exhibition of Milne’s drawings for Pooh-Bear.

This production is being staged at the Rich Theatre at Woodruff Arts Center, which is a smaller theatre but with unobstructed views from every seat in the house. Leora Morris directs a cast of 7 players who seem to love their characters as much as kids loved the story. Grant Chapman is Pooh, who is living in the Hundred Acre Wood. His human friend, Christopher Robin is played by Caleb Baumann.

The story does feature Eeyore (Joe Sykes), who has lost his tail and is going crazy trying to find it. While that goes on, Kanga (Maria Rodriguez-Saber) is trying to get offspring, Roo (CJ Cooper) to behave. Sake Akanke doubles as Rabbit and the Owl in the tree; and Mabel Tyler exudes incredible energy as Piglet. This may be a show mainly for the youngsters, but the cast is fully professional and the set works quite well.

There are many children in the audience and some of them may have some problems during the production, which runs about an hour. But, they do have a “quiet room” adjacent to the theatre where parents and wee tots may do their thing, including being fed in private.

If you can get there early for a show and find a parking meter, it will save plenty of money, as the garage rates are now insane. Up to 59 minutes for $2 then any more and you’ll pay $12. Sort of like being in NYC. Whatever else you may decide to do, you may rest assured that the kids and grands you may bring will thoroughly enjoy the show. More info at AllianceTheatre.org