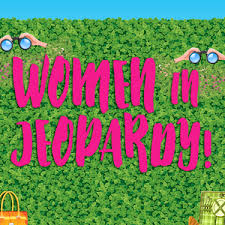 This is a southeastern regional premiere of prize winner Wendy MaLeod’s work, Women in Jeopardy. Fear not, this is not a grim tale, it is more of a Grimm story with plenty of laughs.

Kelly Criss directed a superb cast of players who get to perform on a set by the sisters Curley-Clay that is so cool that the audience even applauded when the scene change occurred in front of them in the second act. Andrew Benator has a ball playing two roles. He’s a dentist as well as a police officer who just happens to look a lot like him. And he changes costumes and personae in split seconds.

Lala Cochran is Liz, a woman who is keen on the dentist; but her BFFs, Mary (Kerrie Seymour) and Jo (Kate Kneeland) have some deep concerns after hearing of something that happened to the one of the dental hygienists working for the guy she’s seeing. The fears grow deeper when Liz’s daughter, Amanda (Caroline Arapoglou) decides to accept an invitation to go on a camping trip with the weirdo dentist, while Mommy stays behind. That’s when Mary and Jo pull in an old squeeze, Trenner (Justin Walker) to aide in safeguarding the daughter.

The scenes shift quickly from Mary & Jo’s home, to a store, to the cop shop and to the canyons in Utah. And there is not a minute that goes by without the audience rolling in the aisles, as anything which could go awry seems to do so. But, all does go well in the end, and the play’s the thing.

There is quite a bit of sexual suggestivity in the script, so it may not be of the kiddies; but if you’re over 15 and under 115, it should provide a very enjoyable couple of hours.

The Aurora is in Lawrenceville and there is free covered parking connected to the theatre. For more info just visit AuroraTheatre.com