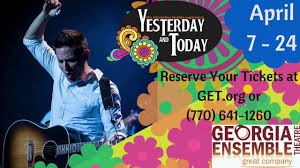 It was in 1964 that The British Invasion really hit these shores, and it was very influenced by those four young men from Liverpool, who flew into New York and took over the music world. Yes, . . .the music of The Beatles is classic and is enjoyed to this day; by those of us who were around then and even the two generations since then.

For those were the days when you could actually understand the words being belted out, the girls wore those new mini-skirts, and everybody was doing their twists and turns in time with the beat. And what a treat it is to have this show here for a nice long run. Some of us will surely try to make a second visit to it, since it is mostly unscripted.

The three McGuigan brothers were brought up as army brats and their dad was a huge Beatles fan. They became addicted to the music as well. And their children are even named after three of the Beatles. Over the years, they have learned every one of the hundreds of numbers which the Beatles wrote and performed, and they’ll do any of them for you without a score in front of them.

The show is staged as an “interactive experience” because they invite the audience to tell them which tunes they wish to hear and see. I say “see” because they are backed up by terrific projected imagery and lighting. So you can go on down Penny Lane, take a trip on a Yellow Submarine, sing to Madonna, or watch Sgt. Pepper as well as scores of others. What underlies this performance by a band of six players is energy. The energy they expend and the excitement they generate.

This group, whose home base is in Omaha, has played around the USA and Canada, and it is a real treat to have them here for more than the usual 2 or 3 days in so many venues. This is a MUST SEE show, you can check it out on youtube and visit GET.org for more info.