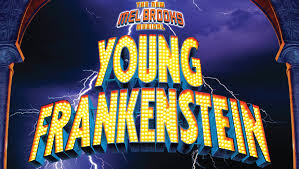 Let’s skip to the bottom line. If you would like an evening of a Broadway Musical without the time and expense to travel to NYC, then go to AtlantaLyric.com and reserve your seats for this production which runs for only a couple of weeks.

Directed by Brandt Blocker, the story comes from a comedy originated by Mel Brooks and Gene Wilder. And, in case you are one of the very few who have never seen the play nor the film, it is about a young doctor in NYC who is the sole surviving family member of the infamous Dr. Frankenstein of Transylvania. He was the one with that hunchback assistant, Igor (pronounced Eye-gore) who is such a scream. Pun intended.

Googie Uterhardt is great as the young Frankenstein (pronounced Franken-steen) and Austin Tijerina plays Igor. When news of the death of the evil Frankenstein reaches NYC, Frederick Frankenstein has to take leave of his fiancé, Elizabeth (Mary Nye Bennett) and ship out for Transylvania. Igor meets him and escorts him to the Castle where Inga (Alison Brannon Wilhoit) awaits him. She knows not of Elizabeth, but is the local vamp who vows to win over Frederick. The deceased Frankenstein’s lover, or at least the one who loved him, is Frau Blucher (Marti Melle Lindstrom.

There are a few problems. The townies are not inclined to accept Frederick. Alan Kilpatrick is the stiff type of Inspector Hans Kemp and he doubles as a blind hermit. And in Act II you will get to meet the green skinned big oaf of a monster played by Blake Burgess. But, this is a comedy, so everything comes out right and nobody gets killed onstage.

OK. So maybe there are an abundance of sexually related double entendres. Not to worry, these won’t affect the younger folks. Everybody will get off on this totally first-class production. Great choreography by Ricardo Aponte and Jennifer Smiles, a great 15 member live orchestra directed by BJ Brown, top quality costumes, sets, props and projections; and a perfect view from every seat in the house.

Seriously . . . . you can’t get better than this. Every cast member is right-on, the whole production just grabs you from the first minute, and you leave knowing that you have been privileged to be in the audience.

The Lyric performs in the Anderson Theatre which is at the south 120 loop and Fairground St. Just south of Marietta Square. Easy to get to, even if you are coming from Gwinnett or any other area. Directions, tickets and more info available at their website mentioned above. If you snooze you lose. This one is too good to miss.