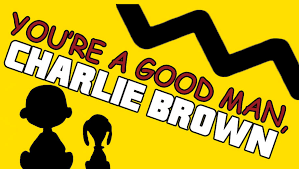 You recall Charlie Brown and Peanuts and the other kids in the most famous comic strip. This play is basically a series of non-related vignettes in which some of the characters primary interests or habits are dealt with. There are musical numbers in each scene, and the six players really pour themselves into going back to youthful times.

Hannah Garmon is Lucy, and she really puts a lot of energy into her intended relationships. Linus is played by Jameson Vaughan and he really works the blanket schtick to the hilt. But it ain’t easy being two years old on stage. The doofus, Charlie, is played by Robby Myles and he does come out quite well in the end. Schroeder (Joe Redd) is at the keys playing Beethoven’s 9th, to the delight of the audience. And the other gal, Sally, is played by Bekah Medford.

Oh, and did I forget that there was an animal in the cast? Snoopy is played with great energy by Claudio Pestana. He may enjoy chasing sticks or frisbies, but it’s all on his terms, since he is the dog. Woof.

Michael Vine directed this show on a stage consisting mainly of large ABC blocks, which easily change into various uses. This new company plays in the Lyric Studio on the Square just off Marietta Square, and easy to get to. Park at one of the meters if you can. More info found at Marietta Theatre.com