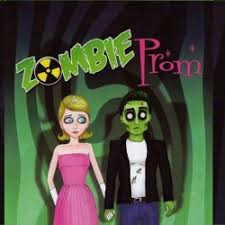 Set at the Enrico Fermi High School, named for the Nobel prize winning scientist who helped to develop the atomic bomb, we meet a bunch of students who are typical teens.

It’s a school where the principal, Miss Strict (Jillian Melko), can be a bit controlling with her requirements to attend to rules, regulations and respect at her school. Loads of us knew as kids that getting called to the Principal’s office meant you were about to experience things you’d rather evade. After all, teens just want to get through the days and have some fun. And boys are boys while girls are girls.

One of the boys is Jonny (Parker Ossmann) who is his own person who just got the H out of his name. He goes for Toffee (Avani Lesane). But even though these two have eyes for each other, Toffee’s parents intrude to insist he is not their type and she must break it off. Jonny is deeply saddened and takes his own life by tossing himself into a nuclear power plant.

And that is when he is soooo missed and they all wish he could come back. He does do so as a green skinned Zombie, and then the next problem becomes deciding if he is dead vs. alive, and how to get him allowed into the Prom, despite Ms. Strict’s refusal to admit that Zombie back int her school.

Directed by Blaine Clotfelter with a highly energetic cast of 10 players, they dance and sing their way through two dozen high energy numbers. This is a small venue with all seats close to the stage so that it is like a cabaret performance. It kind of takes one back to the Happy Days of The Fonz. A very professional and entertaining show at the backstage studio theatre just off Marietta Square. Easy to get to, plenty of goodies, and more info can be found at MariettaTheatre.com