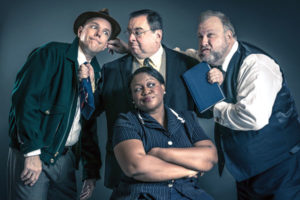 It was back in 1939 when David O. Selznick produced his epic Gone With the Wind. And life certainly was different 80 years ago. For while McCarthy hadn’t appeared on the set back then; there was a motion picture production association which had adopted an acceptable code they referred to as the Hays Code. We didn’t have X rated films then, and while homosexuality may have been totally banned, the code did not explicitly ban all expletives, although the producers assumed it to be so. But one might say that Selznick didn’t give a damn.

Directed by James Donadio, the show is set at Selznick’s (William S. Murphey) Hollywood office. He’s stopped production, sort of like a government shutdown, while he brought in a new director, Victor Fleming (Bart Hansard) and Ben Hecht (Googie Uterhardt) a screen writer with a quick pen. Problem was they both though Selznick had lost his marbles. Who would want to see a film about the Civil War, even with stars like Vivian Leigh and Clark Gable? It seems that GWTW may still be the highest grossing film in history, given all the remakes and it is still being shown and aired to this day.

There is lots of yelling as the three guys try to work through everything in only 5 days, locked down in Selznick’s office. The secretary, played by Mahalia Jackson, has to be the gate keeper, assistant, maid and general everything else. There are times when you can just see the Three Stooges pulling off the slaps and prat falls.

The show runs a couple of hours, and is so appropriate for our town, since Tara was here and this is where general Grant started the urban renewal project for Atlanta. You may wish to visit Margaret Mitchell’s home and the GWTW Museum one of these days. 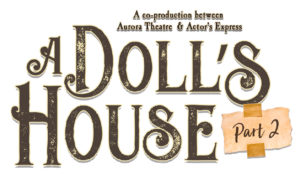 In the late 1800’s Henrik Ibsen put together this story about a woman who stood up for herself and took a hike, leaving her husband and kids to deal with life on their own. This sequel by Lucas Hnath is a co-production by Actor’s Express and the Aurora Theatre.

It’s so timely, inasmuch as it relates to women standing up for their rights, even in these days. Freddie Ashley has come to Aurora from Actor’s Express to direct the show with an all-star cast. The story is about Nora (Tess Malis Kincaid), who walked out on her husband, Torvald (Rob Cleveland) some 15 years before. She ran off and sought to find herself, which she did as an author whose works were published under a nom de plume. It seems she had some legal difficulties and had to impel Torvald to comply with some things to keep other things on track.

She calls at the house to be welcomed by the maid, Anne Marie (Deadre Moore) who may hear and see things from a different perspective, and may not wish to get stuck in the middle of a family feud. The daughter Emmy (Shelli Delgado) comes into the morass when she shows up and sees her mother after all those years. And, it is what she hears and sees that enters into the scene.

If you’ve heard Sinatra sing After You’ve Gone then you may think that is the message of this script. A very nice and easily working set by Isabel and Moriah Curley-Clay, and actions and reactions that may cause you to think of yesterday’s newscast. It isn’t one for the kiddies, but nobody gets physically harmed or abused. It is another one of those theatre “collusions” but is not a conspiracy, it is great in that it saves each of the houses a lot for sets, costumes and so much more.