Once upon a time there was a woman in the Lone Star State who actually got elected Governor and served there form 1991 to 1995 when she lost her reelection bid to Dubya, who later went on to the White House. Not only was Dorothy Ann Richards a woman, she also was a Democrat; indeed unusual in Texas. Playwright Holland Taylor crafted this one-woman show to bring Ann back to life to all of us who did know of her, as well as those of us who never heard of her.

In this 2-act production we meet Clarinda Ross who, as Ann, is running her busy life from the Governor’s Mansion as she deals with family, friends, problems, politicians, and all the daily stuff we know of, plus a whole lot more. For most of us who have trouble remembering our postal zip code, it is impressive when one brilliant actor can recall an entire 2 hours of lines, without messing up a single one.

Directed by David Thomas, the show draws you in and moves effortlessly, with a bucket full of laughs along the way. Ann was one who told it like it was, and had no holds barred on her opinions. It is a show that also appeals to and empowers women, especially in these days of national insanity. Many of us always thought there must be something in the water down in Texas; but now we know it flows through all 50 states. 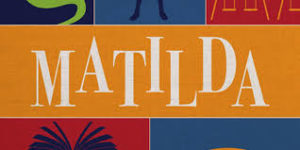 The musical version of Roald Dahl’s Matilda has hit the stage at Atlanta Lyric Theatre in Marietta. With music and lyrics by Tim Minchin, this large scale show is directed by Bethany Irby with a cast of more than 30 players, most of whom are young folks. Choreographed by Kari Twyman with music directed by Amanda Wansa Morgan the actors move energetically through all 22 numbers in two acts.

Young Marissa Bondurant comes on as the young genius Matilda, and Brandy Bell is her favorite teacher, Ms. Honey. And Timothy Ellis comes on as that nasty principal, Trunchbull. This is one where if you have read the book and recall the story line you will dive in faster and deeper as to how Matilda finds out she has telekinesis that she can put to use, and many other talents.

If you unaware of the story and the characters, it may be a bit harder to grasp it all, as the songs are often sung in choral fashion and always at full volume. The kids loved every scene, while the adults most often took their clues from the them. It is a usual Lyric production in that the costumes, set, dance and songs are top quality and what is so special is that so many young teens are playing full tilt.

Lyric has free parking, plenty of goodies, and every seat has good view. This is a great one to introduce a youngster to theatre. More info and tickets at AtlantaLyricTheatre.com 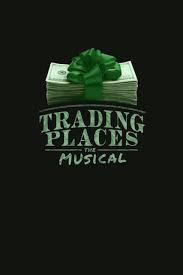 Kenny Leon is back in town, and in a certain manner has brought the Big Apple back with him. Based on a film by the same name, this adaption into a musical was written by Thomas Lennon with music and lyrics by Alan Zachary and Michael Weiner. But when the offer was put on the table, Kenny Leon must have yelled YES at full volume.

The story is inane, as it is how two commodity brokers who happen to be siblings, get into a bet with each other as to how one of them might train some street person to cash in big time. Nothing goes as planned, and even though two folks trade places they each turn out to be better human beings. That is not something that often happens on Wall Street.

With a cast of more than 20 players, and a full scale live band they work through about 18 numbers, with good sets, props, costumes and choreography. If you think this is one that could actually go from Atlanta to NYC then you are right on; for it has the appropriate story line and the proper street lingo. After all, is not the “f word” the universal modifier in many urban areas?

High powered evening with great seating for all. More info and tickets at AllianceTheatre.org 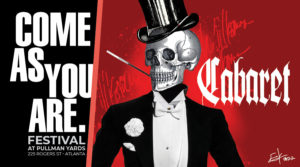 Cabaret
The Atlanta Opera
through June 19, 2022

This isn’t the usual opera venue, as this is part of their Come as You Are Festival taking place at the Pullman Yards south of town. The facility is a large athletic center which they remake into an open stage presentation facility. And whereas Cabaret is done in a cabaret style it is all in the open amid a house full of tables and chairs.

Considering all the miserable things going on in our world these days, , it seems so poignant to have a musical rooted in hysteria and anti-Semitism. One can only trust that it serves to point out the errors of the past instead of appealing to secretly harbored resentments.

With music by John Kander and lyrics by Fred Ebb, Curt Olds plays the part of the deliciously banal emcee of the Kit Kat Klub (just a coincidence that those initials are KKK ?) The female lead, a tawdry and easily corrupted English performer in the Kit Kat Klub, Sally Bowles, is played by Aja Goes.

But what to say of relevance? First of all this is NOT a show for children. One man in the audience was overheard to say that he was glad he hadn’t brought his church group to this show. It’s not for children, not for those easily offended, not for those who lived through WWII and would rather forget. It’s loaded with sensuality, licentiousness, easy sex, sex for pay, bisexuality and homosexuality. There’s something for everyone. Older patrons will understand the complacency in the face of disaster that is the theme of Cabaret. What will theater-goers with limited knowledge of the 1940’s really understand of this tragic era? Life was a cabaret for many people who sought to avert their eyes from the gathering clouds. But as the clouds of war formed o’erhead many of the rats (in this case the persecuted and the soon-to-be persecuted) scurried to the storm drains in often vain search for safety. One must understand the history of the period to get the full impact of this powerful musical.

When Anthony Laciura sings “If you Could See Her as I do . . .” which he does with a gorilla it is NOT a variety act. It is a parody of the love that greengrocer Herr Schultz has for Fräulein Schneider (Joyce Campana). Schultz is a native born German who thinks of himself as German first, and as Jewish second. Obviously the State is going to reverse that hierarchy when Hitler takes complete control. He’s betrothed to Schneider who is gentile, and who is coerced by fear into breaking off the engagement for fear of reprisals which seem doomed to come in the new Germany.

Cabaret is a good show. It’s a tough show and it has legs. If there’s any moral here for those of us sitting in our comfy homes in Atlanta in the year 2022, it has to be that we can not blithely ignore those who would exert powers over what we believe, how we worship, and how we relate to our fellow human beings. Each of us is not the architect of our own fate, and very few of us are the masters of our own ship. Only by standing up for what is right for all of us, which includes the right to disagree with prevailing vocal majorities, do we protect what so many gave their lives to preserve for us to this day. 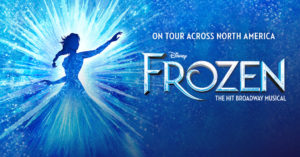 Disney Theatrical Productions has hit the road nation-wide with their impressive production of Frozen. Where most shows presented here run just six days at the Fox, this one will be playing to huge houses for almost two weeks before they pack up and head to Charlotte NC for a two week gig.

The musical is based on the book and film by Jennifer Lee, and stars a cast of 35 players taking the stage to work through more than 20 numbers with great costumes, moves, and orchestration from their own touring orchestra.

This is a show that parents are rushing to bring their youngsters to. Nobody is getting killed nor attacked, there’s no usage of the usual Broadway street talk, and every scene draws in the kids as well as those older folk. The show does run 2+ hours, so the young folks are going to get home late, but they’ll remember the evening for a long while.

Before you go, if your are driving then make sure you have pre-paid for parking as near to the Fox as you may feel comfortable paying for, and allow extra time to actually get to/from the parking lot to the main entry. It helps to get there early, especially to do a look around in the souvenir areas off the lobby, where loads of cute items await.

Bottom line is that this is no less than the quality you expect from Disney. For tickets and more info go to FoxTheatre.org