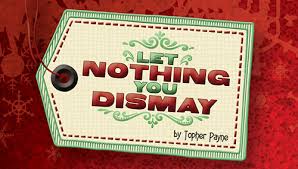 Let Nothing You Dismay

There are but a few performances left this year for this riotous new play by our brilliant local playwright, Topher Payne. This is another example of the suggestion that the definition of dysfunctional should be “see family.”

For we meet these folks in the waiting room of a hospital where a young woman is about to give birth to a child whom she has agree to permit a young couple to adopt. In this non-stop laugh-fest there are 8 players doing 22 roles. If you did not read the review in the AJC, then you are fortunate; for it doesn’t do this work credit.

Shannon Eubanks has directed this one with all the players running in and out and doing some quick changes. Emily Sams and Ben Silver get stuck playing the adopting wanna-be parents; while Amanda Cucher, Bryan Brendle, Mark Grey, Doyle Reynolds and Gina Rickicki each play 3 roles as does Shelly McCook who shines as the weird-o earth mother type.

The play timing is set as Christmas eve, albeit doesn’t need to be that date. It does give one of the visitors a chance to redecorate the waiting room with a tree he happened to “find.” Typical of Topher’s works we have some strange family members and relationships. You’ll meet a nun who is part of the family, as well as some in-laws who are Jewish. There are youngsters and then the old folks who are the type who wonder about the hereafter; as in “what am I here after?”

This is one that we wish could be extended, but with the holidaze coming upon us, the show must close this weekend. But, let nothing you dismay, for I am willing to bet this will be back next year as it becomes a Christmas standard. There may be a few seats left if you visit StageDoorPlayers.net 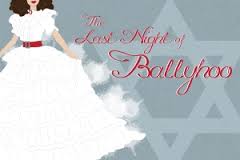 The Last Night of Ballyhoo

After the success of Driving Miss Daisy, Alfred Uhry was commissioned to create this work as part of the arts festival for the 1996 Olympics here. It premiered at the Alliance and then had a run in New York and elsewhere. It’s a story about a Jewish family and their own idiosyncrasies, and set in 1939 at the time when Hitler was starting WWII.

The Jews who lived in the South were, to a great extent, merchants. Why not? Had to be a reason to leave the north where one could get good bagels and lox, and head to a land where the locals went for boiled peanuts and pork rinds. And, what Uhry points out is that not only were there discriminations twixt Jews and non-Jews; but within the ranks of the Chosen People. The Germanic Jews didn’t quite dig their fellow Jews from Eastern Europe who hadn’t quite assimilated.

So we start off with Adolph Freitag (David Skoke) who owns a mattress factory and his sister Boo (Johnna Barrett Mitchell)and nieces Lala (Paige Crawford) and Sunny (Deborah Whitlock). They live together and they have a Christmas tree in living room. They are concerned about who will take the girls to the Ballyhoo, a ball sponsored by their country club. Adolph’s sister-in-law, Reba (Lauren Tully) also lives there but is trying to not get too involved with what goes on around her.

There are a couple of gents who enter the scene. Joe (Brandon Lee Browning) comes off as an uptight new employee of Adolph’s company, and he winds up in a relationship with one of the gals; while a visitor from Lake Charles, named Peachy Weil (Jonathan Harrell) shows up in Act 2. He provides a lot of the humor inasmuch as he is always pulling somebody’s leg.

Where the story goes, is really nowhere. It is a vignette of the lives of several people interacting with outsiders as well as those within their own circle. Instead of a family member being concerned about one who marries outside their faith, it narrows down to concern about one whose version of a faith may not quite match their own; or as the Brits may call it, “NQOT” for not quite our type.

Well staged and directed by Chris Ikner, there are two remaining performances, December 18 and 19. The location is in Sandy Springs, right behind Trader Joe’s, and more info and tickets are available at Act3productions.org 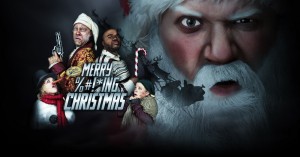 The Dad’s Garage company has brought a terrific production to the Hertz Stage at the Alliance. The play, by Kevin Gillese and Arlen Konopaki, is a riot. Know before you go that this is NOT for the kiddies; nor for Miss Prim. There are plenty of expletives and single entendres, but the show is a winner.

An off-duty Santa (Chris Rittelmeyer) runs onto a little orphan girl (Karen Cassady) who is moaning about her status. But, this Santa isn’t the nice all-loving tub of joy one might expect. For he is being hunted down by Scrooge (Chris Blair) who has been brought back to life to the present day so long as he does as he is told. He teems up with a despondent guy, Jerry (Mark Kendall), and these two have their differences in finding their ways through life as it may be. I can’t disclose the story line, but safe to say, it ain’t the usual.

One character who will really get to you is Frosty (Taylor M. Dooley). Frosty has some problems that will just seem to warm you (and Frosty) up. Frosty’s creation, costume and appliances are a show within a show.

There are dozens of scenes and the actors do twirling jumps to denote each scene change. Unlike the usual improv works this company is famous for, this one is pretty well scripted and co-author Kevin Gillese directs the show. Some of the lines are sooooo funny that you will want to scribble them down for your own use.

The show is a 2 act production, with Ed Morgan and James Watson providing musical backup and narration. It runs about 2 hours with a 15 minute break. Great lines, many costume changes, a flexible set, and a very happy evening of not-your-usual stuff.

For tickets and times visit alliancetheatre.org/content/hertz-stage and follow the yellow brick road.