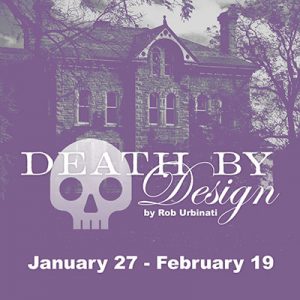 Come along to the Bennett’s home in the village of Cookham, along the Thames.  The couple who own the place seem to have some relationship stresses.  Sorel Bennett (Kelly Chris) is an actress who just KNOWS she should be getting more acclaim.  Hubby, Edward (Kevin Stillwell), has just shown up at the wrong time; for Sorel had invited a politician, Walter (Daniel Burns), to spend some time with her in the country.

The maid, Bridgit (Joanna Daniel), isn’t quite into aiding and abetting some tryst.  She’s pretty put off inasmuch as it’s hard to entertain and do dinner when there’s nothing but some greens in the pantry.   And the man-servant, Jack (Chase Steven Anderson) has his own agendum.  Everybody has something they’d rather not share.  C’est la vie.

Then things start to get a bit more difficult inasmuch as Walter seems to be of a mind similar to a current president of these States, via-a-vis support for the arts.  That doesn’t play well within the play with those of a different political view.  When Victoria (Bryn Striepe) shows up she fuels the fire even more as she is as egocentric as any performer could be.  Sarah Halicks and Pat Young round out the cast of eight players, and each and every one does a truly fine job.

Like one of Agatha’s tales, the politician seemingly gets whacked; and in Act II they must figure out who the culprit is.  That’s not easy since everyone there would gladly have done the deed and taken full credit for doing so.

Playwright/actress Suehyla El-Attar directed this comedic farce, which is soooo much like Molière and Agatha joining forces.   Considering the very recent moves by somebody to drastically reduce support for the arts, it seemed no wonder that the theatre would have chosen this play.  But, it was selected a year ago and I guess it was an act of dramatic prescience.   More info and tickets at StageDoorPlayers.net 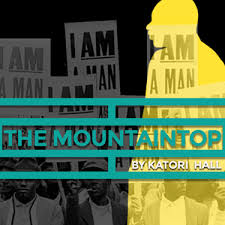 The Mountaintop
Aurora Theatre
through February 12, 2017

It was in April 1968 when Martin Luther King, Jr.  was in Memphis at the Lorraine Motel.  He was working at getting together another march in his work for civil rights for all people.  And it was on the balcony of the motel on April 4th that shots rang out which resonated around the country and the world.

In this fine script by Katori Hall, we meet a preacher-man who really is a man, and who has not only scriptures within his mind, but street smarts.  He’s not put off by plain spoken words; for it is the intent of the speaker not the words which may be uttered.

Without revealing the unexpected relationship of the two actors, it’s a tale told in normal tongue, about a man whose been there, seen it and been through it.  He may not know how long the trip may be, nor where the final stop may be; but he’s prepared for what may occur.

Neal Ghant is MLK, Jr.  and he shines brilliantly in this work.  Cynthia D.  Barker appears as the maid, Camae.   She is also terrific as these two interact in this 90 minute performance.  She may look like a maid, but she may be a whole lot more.

Eric J. Little, who has acted and directed around town in many venues, directed this fine production on a static one-room set by the sisters Curley-Clay.   Yes, . . . you know where the story must go, but you really want to see it through the eyes of those closer to the event.

This is one mainly for adults, and one’s religious beliefs (or lack thereof) are immaterial.  The Aurora is easy to get to in Lawrenceville, with plenty of free parking, and every seat in the house has a fine view.  More info and tickets at AuroraTheatre.com 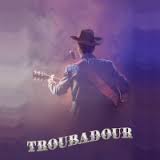 A troubadour is a poet, minstrel, musician, singer and courtly entertainer.  And this is about two entertainers, finding their way to fulfillment, crossing lines, gathering strength, finding peace and so much more under the horizon.

Scripted by Janece Shaffer, the story is set in Nashville in 1950s when country music was undergoing some changes.  Billy Mason is a performer who is basically a Bible thumper singing country gospel numbers.  He’s played to the hilt by Radney Foster.   His son is Joe Mason, who is always in the shadow of his father’s fame and acclaim.  But, Joe (Zach Seabaugh) isn’t quite on the same page as his dad.

Rob Lawhorn ties the scenes together as a radio DJ/announcer for stations where Billy and Joe may show up.  The score was written by Kristian Bush, who took the story line from Janece and created the fabric to help tell and sell the story.  And, on the subject of fabric, we meet Andrew Benator, who is Izzy, an immigrant tailor who dreams of becoming the designer/manager to the stars.  He wants to invent an Elvis.

Izzy meets up with Inez (Sylvie Davidson) a composer-lyricist with a huge collection all in her head;  and nothing of substance other than the clothes on her back and her guitar.  She might be just what he needs, to help get Joe out of street clothes and into rhinestone studded cowboy attire.  After all, appearance will help him get to center stage at the Grand Ole Opry.   Bethany Anne Lind plays the vamp for Joe and vampire for Inez.

As the show progresses we get to view the trio of musicians in the broadcast studios, and the set by Todd Rosenthal works really well, as it rotates easily moving and changing scenes.

Billy gets really ticked off with Joe, when Joe seems to stray from the father’s line.  The ties are broken and may never be mended.  But, as life goes on, things resolve themselves as the father and the son find more glue that binds them than grit which comes between them.  If it sounds like a family you know, then maybe it will give you hope, in a time when hope may seem less productive than in years gone by.

This is another one of those Alliance shows which certainly looks like it could be Broadway bound.  So see it now, while easy to do so.  More info and tickets at AllianceTheatre.org

It was more than 400 years ago that Christopher Marlowe penned Doctor Faustus.  It was a story of a man from Germany who had excelled in all the sciences and had some concerns about the creation of the world as he knew it.

Was there really a heaven and a hell?  He would wish to experience them were they to exist.  You can well imagine the reaction of religious leaders of the day, to one who would deny the existence of a deity and/or make a pact with the devil.

This one-act presentation, directed by Jeff Watkins features Chris Kayser as Doctor Faustus and Laura Cole as Mephistopheles.  Faustus summons Mephistopheles from the Devil and makes a written pact with the devil, whereby Faustus shall have 24 years to remain on earth, with Mephistopheles as his servant and magician to do all of his bidding.

The contract with Lucifer is signed in blood, and after two score and four years, Faustus shall spend an eternity in hell.   The underlying question is whether or not there is a deity who can decide prior to a death who shall enjoy an eternity in a heavenly place and who shall forever suffer in a hell.  Do we know if there is any predestination?  Beliefs aside, the question remains unresolved.

This is a short play of about 80 minutes.  We’re told in the play that misery loves company, and fighting the traffic to get downtown early for this one, may bring it to mind.  Show times are 7:30 and because it is performed in the round, and is one-act, in a dark and foreboding manner, no late seating is permitted.  So get there no later than half-hour prior so you can grab some grub and/or a pint or two.   More info at ShakespeareTavern.com

This is a premiere of a new work by Topher Payne, commissioned by Georgia Ensemble Theatre; and it is totally different than anything you might have expected, especially if you are familiar with much of Topher’s works.

Welcome to Zardelgnia, a sinkhole of a country east of the Urals.  The Prince Paljor (Skye Passmore) is being held captive, sort of like a princess in a tower, by the egotistic General Mahzuno (Cristian Gonzales).  Some of the local folk would like to get the Prince back, and one of them manages to get him a laptop where he can search for help.

So back in real time we meet a retired teacher, Rhonda Charles (Brenda Porter) and her best friend Marybeth Mulaney (Karen Howell).   Rhonda wants to start doing something to help others, and she puts a posting on a social media site.  And, that’s when the needs merge.  Rhonda gets an email from the Prince who asks for her assistance, in the unknown region where he’s located.  Rhonda has no idea of where the place is, but at her age she is ready to take a SKIN (Spend Kids Inheritance Now) trip to nowhereville to be of help.  Marybeth thinks she’s lost her mind but as her BFF she just has to go with her.

Zardelgnia is not quite what anyone might have expected, but once they’re on the ground, they just have to deal with it, and the story goes on.  Directed by Shannon Eubanks and with Stacy Melich, Parris Sarter and Jef Holbrook rounding out the cast in 3 roles each; it is an unique experience.  You also get to know Shamala, who speaks not, but has a major role.

It may well be that the playwright was inspired by recent political matters, some classic bedtime tales and current world events.  It’s not a musical.  It is a play about values and what’s important in life.  Might not be for everybody, as you join the trip to wherever it goes.

I can’t tell you more, as you have to visit there yourself.  There’s more to the tale than what is said above.  So get your passport and bring your visa (card).  More info at GET.org