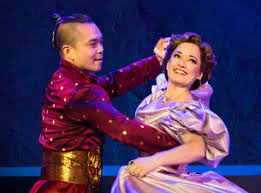 The King and I
Fox Theatre
through October 1, 2017

Once there was a book, Anna and the King of Siam, and from it’s pages Rodgers and Hammerstein crafted one of the most famous of Broadway shows, which to these days plays around the world.

It’s a story about a woman from England who accepts a job to be the teacher to the children of the Potus of Siam (now known as Thailand). He’s an egotistical pain, who feels superior to everyone in his land. And his children number in the sixties and the group continues to expand as he plants his seed so often.

He’s promised this teacher a home of her own, but reneges on that, much to her dismay. But, she gets attracted to the kiddies and toughs it out; finally getting the king to reassess his attitudes.

This touring production from the Lincoln Center stars Laura Michelle Kelly as Anna, and Jose Lana as the king. With a great set, a live orchestra in the pit, and some terrific costumes and a cast of dozens of players, the show is a delight to the ears and the eyes.

The ballet in Act II, about their interpretation of Uncle Tom’s Cabin is just terrific, and the numbers like I Whistle a Happy Tune , Hello Young Lovers, and Shall We Dance will be fondly remembered by those who recall the show and the score from days of yore.

It closes Sunday, so for more info and tickets visit FoxTheatre.org And, if you want to escape the NYC style parking fees think about Marta to North Avenue. 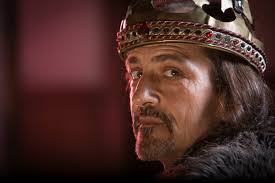 While most of us know about Romeo, Juliet, the one whose name may not be mentioned, and others; few of us have heretofore seen The Bard’s opus about the Reign of King Edward III.

So come back to the 1300’s and Edward takes over the throne of England. He’s a bit of a warrior and after gobbling up Scotland, he declares himself to be the proper ruler of France; and the hundred years war commences. For more info on the war go back to your Cliff’s Notes.

Directed by Mary Ruth Ralston, the play features Drew Reeves at Edward III, and David Sterritt as his son, the Prince of Wales. Other principals are the Earl of Warwick (Clarke Weigle), Earl of Derby (O’Neil Delapena), Earl of Salisbury (Chris Rushing) and John II, King of France (J. Tony Brown). The cast of about 16 players, come off in more than 28 roles. The play is pretty intense, and David Sterritt captains some terrific fight scenes.

While the factual history of the events being described may be a bit unknown to many of us, the play is the thing, and to that we must shout Hazzah for a job so well done. It is incredible that these performers can remember all these lines, and at the same time getting prepared to open the next play, the one whose name may never be mentioned, only 5 days after this one closes.

The Tavern is downtown on Peachtree Street with plenty of parking at the Emory Hospital garage across the street. They’ll discount your parking fee if you show them your ticket stub.

And, plan to grab some pub grub at the Tavern, as they have a pretty substantial menu and plenty of libations, fit for peons as well as peers. More info at ShakespeareTavern.com

Few of us would know that this incredible play was written by a gent who grew up in China. He was from a family of British missionaries. The script was so well crafted that even Hitchcock took it to the big screen without any changes, and more than 50 years later it is still elating audiences around the world.

This production is a delight with Stage Door Players Artistic Director, Robert Egizio taking center stage as the conniving husband, Tony Wendice. His wife, Margot (Kristin Markiton), has some relationship with a Yank, Max Halliday (Chad Martin), who is visiting London. While Max and Margot may have interests in one another, Tony’s eyes are elsewhere. But, Margot is the one with the money and he decides that were she to predecease him, that everything could come out right in the end.

He drags in Thompson (David Allen Grindstaff) to do the nasty work. Thompson will be provided all the info and tools to do the deed, while Max is being set up as the alibi for Tony on the night of the murder. After all, Tony is a mystery writer and if he can’t concoct to perfect scheme, who could? And when the bell rings, the action will start.

Oops. Seems that something goes wrong and Margot survives, so what’s the hubby to do? Change the script and that he does. It is foolproof, except for the fools from Scotland Yard, who may be a wee bit smarter than Tony thinks.

Doyle Reynolds and Charles Green are the coppers, and they may find some tiny little omissions which may change the direction of Tony’s plot. OK, . . so you recall the film, and possibly the glitches that seal the deal; but this is a splendid production directed by Kate MacQueen, with a perfect set by Chuck Welcome.

The theatre is easy to get to, free parking, and all seats have a good view of the action.

October seems to be a time for ghoulish stuff, culminating with all hallowed eve. And the Aurora runs their Ghost Tours in Lawrenceville, and this year they take us back to the bad olde days in New England.

Diany Rodriguez plays a young woman who has lived through the days of the witch hunts in Salem, and has some memories that she just can never erase. She knows more of the spirit world than many other folks, and also can be a healer of others using homeopathic and other uncustomary procedures.

She meets up with a young man (Lee Osorio) who has the pox and needs somebody to save him. He says he is a seafarer, and maybe he, as well as the young lady, have some things in their personal history they’d prefer not to publicize.

The woman cares for a young lad (Joshua Pagan) who had no family nor home. And, at one point she has to consider finding him another foster parent. Olivia D. Dawson plays an older woman, who had taken in the younger one, trained her, and is possessed of knowledge of the past in the region. And Peter Hardy is an older gent who appears as a judge and minister in this tale.

The story is derived of the saga of Abigail Williams who actually was involved in the accusations against more than 20 people in the Salem witch trials of 1692, and most of these alleged witches were put to death. So come back to the days of Salem, and The Crucible, and see some more of the background that was kept a secret for so long.

The play by Roberto Aguirre-Sacasa premiered about 4 years ago to great acclaim. And this cast of five players directed by Justin Anderson, uses a terrific set by Isabel and Moriah Curley-Clay, and does a very intense trip through those days in a one-act show that runs about 95