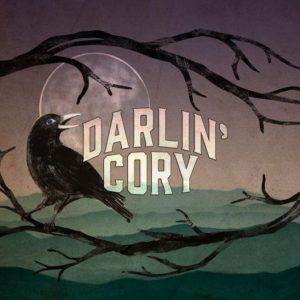 What a delight to see the Alliance back in full swing! And with this premiere production in such epic style.  This eerie tale was created by Phillip Depoy and Kristian Bush who collaborated to tell the story of a small mountain town in Appalachia that was deeply infused with the idea of maintaining the status quo ante of the town. They didn’t even have a road in or out of the town back in the 1920s.

If you know some of the small towns in north Georgia or nearby Tennessee or Kentucky, then you’ll know this one. And the music is put forward in appropriate style as bluegrass would always be. Two things occur that create a stir in the town. One is the tragic shooting of a young woman in the hills. And the other is the arrival of a stranger, who makes some really great moonshine. For in the days when alcohol was banned, the making of shine was a standard in these here parts. But, if y’all don’t think they still be making shine, then I got a toll booth I would like to sell you.

The cast is a dozen actors who have played in many shows here. Jeremy Aggers, Jimez Alexander, Marcello Audino, John Bobek, Jewl Carney, Katie Deal, Kelli Dodd, Rob Lawhon, Rhyn McLemore, Gillian Rabin, Maria Rodriguez-Sager and Asia Rogers sing and dance their ways into your hearts and minds; all under the direction of Susan V. Booth.

Once you get into Act II and start to fathom out the secrets of identities and activities, you’ll try to keep the secrets from those who’ve not yet seen the production. For the play’s the thing and it don’t get much better than this one. We all salute you, Alliance!

Covid protocols are observed and are set forth in the web site and when you go for tickets. So while social distancing is not seen, strictly good behavior is. More info and tickets at AllianceTheatre.org 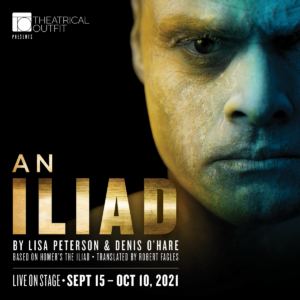 AN ILIAD
Theatrical Outfit
through October 10, 2021

In the mid 1800’s a French gent opined that the more things change the more they stay the same. And maybe he got that idea from reading Homer’s, The Iliad. For these days when we deal on a daily basis with natural enemies in nature and health issues and are also facing worldwide instances of wars among various groups; we might be seeing the world as Homer did.

With the production of this work by Lisa Peterson and Dennis O’Hare we go back in time, set in real time by the incredible solo performance of Lee Osorio who is center stage in a one act performance running and hour and 45 minutes. It blows your mind to consider how one actor can recall all those lines, when some of us have trouble recalling our phone numbers.

Directed by Matt Torney the show pulls the audience in as the modern poet infuses the story with his own feelings. While he is doing so, his muse (Deisha Oliver) is stringing along on her cello.

This is not one for the pre-teens, who will still be reading short synopses instead of the whole work for their next classroom test. But it surely makes us think how rockets in North Korea may be modern Trojan Horses, etc.

Theatrical Outfit is downtown on Luckie Street, with a parking garage adjacent to the facility. They follow strict Covid rules, so you show your vaccination card and have your temperature taken upon arrival; and are told to keep your mask on in the theatre. Regardless of all that stuff, it was great to see a pretty full house. More info and tickets found at TheatricalOutfit.org 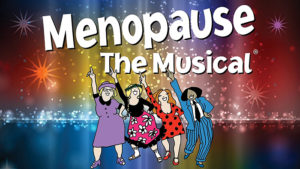 If you didn’t get to see Menopause before, you’ve missed a riotous evening of good entertainment. So, . . . here’s your chance again. They’re back! Four wild women find one another in Bloomie’s and they are each dealing with the changes in life that they knew were coming, but didn’t really enjoy.

First thing I have to tell you is that a lot of guys could be put off by the show title or subject matter. But, it really is not just a chick show. For the guy who has an IQ higher than many politicians and understands that women face life changes as they age, it can be just as entertaining as it is for his lady. But, for the guy who’s world consists of watching race car drivers run around in circles it could be a bit like watching a film with subtitles. He wouldn’t dig that, either. But, this is really a great alternative for the YaYa Sisterhood to grab a fun evening out, even if it doesn’t offer big screen hi-def and slo-mo replay.

The cast of four wonderfully meshed players consists of Rebecca Fisher as the actress on the way to retirement, Anise Ritchie as the business woman, Melanie Souza as “Earth Mother” and Terri Dixon as a housewife from Iowa. Four distinctly different backgrounds and a perfect match up of ensemble acting and singing. It’s a great cast of very talented ladies.

The score is really unique in that it consists of licensed music mostly from the groovin’ 60’s so you will recall the tunes and much of the lyrics, except that the lyrics in this show are a parody written to tell their story. The old standard “Heat Wave” which dates from the 1930’s by Irving Berlin now resounds with, “I’m having a hot flash / A tropical hot flash / My personal summer is really a bummer / I’m having a hot flash.”

It was a delight to see this show playing to an almost sold-out house, and everybody having one great time. The Strand is on Marietta Square, with a public parking garage adjacent, and good seats throughout the house. While seating is not spaced widely apart, all patrons are requested to wear masks and don’t come if feeling lousy. More info and tickets at EarlSmithStrand.org

Y’all come on in to this here one-horse town somewhere in Georgia back in the 1940’s. It was one of those places where everybody knew everybody and everything about everybody. Didn’t have to marry a cousin to get to hear all the dirt. Their primary understanding was that neighbors help neighbors, and they were proud to stand by that. But, even in utopia things can go awry; and they sure did when Miss Gertrude passed away.

It seems there was something about Miss Gertrude that nobody other than her doctor (Hunter Showalter) had ever heard about. And when some of the stuff came to the front, many questions arose as to where the poor lady should be interred. Some might say she should be sent back where she came from; but Second Samuel was really her home after 25+ years there.

A cast of 11 players take the stage on a really god set designed by Barry N. West, who also directed this very intriguing production. A lot of the action is narrated by B Flat (Geoffrey Goff). Nat Martin plays US, the townie of a different background who isn’t gong to accept any kind of discrimination. The local pub owner is Frisky (Matthew Easter) and he’s married to Omaha (LeeAnna Lambert). But they have some odd-ball interactions.

Omaha and three other ladies (Lisa Gordon, Courtney Loner, and Elizabeth Underwood) meet up at the salon and all hell can break loose among them when they get in the Miss Gertrude details. Inasmuch as the play’s the thing, I can’t tell you what that problem is; but as they move through Act I, you will be sucked into the details. The other guys are played by Paul Spadafora, Charles Bohanon and Steven Medina; and every one of the cast does a perfect job.

For as we move on to Act II, we feel as if we are living among the folks at Second Samuel; as they must work through their differences of opinions vis-a-vis Miss Gertrude; who we never actually meet for she has passed away. The show is a little less than 2 hours, including intermission.

Onstage follows Covid safety protocols. You must show proof of vaccination or recent test, wear your mask at all times in the facility and consume any food and beverages on the patio. But that’s just life these days in Second Samuel or Atlanta. We all want to stay healthy and somewhat sane.

This show is not really for the kiddies, but everybody in the audience will enjoy it thoroughly. More info and tickets at OnstageAtlanta.com 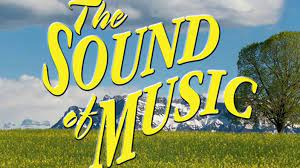 The Sound of Music
City Springs Theatre
through September 19, 2021

The story of the von Trapp family has been written, staged and filmed since the 1950’s and is always an audience builder. Just watching the children on stage certainly reminds one why many actors hate to share the stage with animals or children. They capture your very soul.

Shuler Hensley has once again brought a fully Broadway style production to this lovely local stage in Sandy Springs. And it was wonderful to see that the house was almost sold out. That’s not what we’ve seen these past couple of years. Yes, you must wear a mask, and show proof of vaccinations as well as pass security. But, it is certainly worth doing so.

The story line is loosely based on the story of the von Trapps and how and why they got out of Austria as the Nazi anschluss brought down the government during WWII. Most of us can’t recall every note of every number; but we can never erase numbers like Do-Re-Mi, Edelweiss and Sixteen Going on Seventeen. Ellie Fishman plays Maria, who gets hired by Captain von Trapp (Mike McGowan) and the cast of more than 20 players includes the seven von Trapp children that you just want to run up to the stage and hug. While the story is set in terrible times, there is comic relief provided by Max (John Scherer) who wants to promote the family singers into a local concert.

In fact the Trapp Family Singers were a reality and actually toured the United States in the 1940’s. And the remaining von Trapp singers were onstage here a few years ago. It is a show which really resonates more with adults than kids; especially when the final scenes have the swastika flag flying as they escape from the production. Like other productions at City Springs, this one has a full orchestra under the baton of Miles Plant.

Every element of the show is totally professional and this is one you will fully enjoy. It plays only for another week, so get more info and tickets at CitySpringsTheatre.com