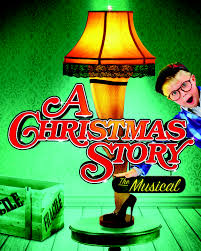 A Christmas Story
The Musical
Fox Theatre
through December 4, 2016

We know it is the time of year for all the rent-payers being staged.  You may have seen The Nutcracker or Christmas Carol many times, and maybe even have seen this show in the old film from the 1980’s, or on TV.  But, this production is one you really will want to take the kids to see.

You start off with Jean Shepherd (Christ Carsten) doing his on-the-air routine about some days of his youth.  He recalls his father “The Old Man” (Christopher Swan) and his desires to get rid of the those darn dogs from next door, and maybe to even win some prize as a puzzle solver.  Well the old geezer does win a prize, albeit isn’t exactly what one might have imagined.  It’s a lamp that looks like a lady’s leg in hosiery and wearing a spike heel.  But, it works for him; because now he’s a “winner.”

Susannah Jones plays the wife and mother to two young lads.  Ralphie, is the center character and it’s about what he wants for a Christmas gift.  This role is played alternatively by Austin Molinaro and Myles Moore.  And Ralphie’s brother, Randy is played by Arick Brooks.  In all there are more than three dozen players and great sets, costumes, special effects and live music.

The young actors/dancers/singers and the Bumpus hounds, bring to mind the old adage about why adult actors never want to share the stage with animals or children.  These youngsters are nothing short of inspiring, and everyone from 8 to 98 enjoyed their presence.

The evening shows are at 7:30 so you can get the kids (or oldsters) home by 10:30, as it runs about 2 hours with one intermission.  But, get there early as they now have a security line a bit like being at the airport.  Ralphie may want a BB gun for a gift, but do NOT plan to bring one for him.
More info easily available at FoxTheatre.org 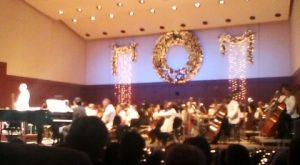 The ASO brought down the house with their Pops Orchestra under the baton of Michael Krajewski, and with performing guest artist, Byron Stripling.

Stripling is a renown trumpeter who has played jazz and other genres around the country.  One aspect of his audience appeal is how well he works the house with his comedy routines and interaction.

In this weeks concert for the holidays, they did 14 different numbers, many of which were akin to being at Preservation Hall.  Especially with numbers such as Minnie the Moocher and St.  James Infirmary.   And, of course, they played off at the end with When the Saints go Marching In.

Byron, who serves as Artistic Director for the Columbus Jazz Orchestra, brought along one of his young piano geniuses, Micah Thomas, who was right downstage center, and was great when he ran through some of the ragtime numbers.

The Tribute to Louis Armstrong, which was the theme of the concert was one that Satchmo would certainly have appreciated; as did a full house audience. It was a great start for some Happy Holidays. 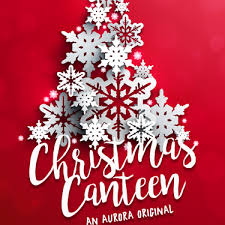 For the 21st year, the Aurora Theatre has staged their canteen performance.  Directed by Anthony Rodriguez and Jen McQueen, the cast of eight singers, and dancers delight the audience with the customary holiday tunes, but also some tributes to the men and women of our military and some other numbers that don’t shout out Merry Christmas, but help to get the message across.

Brandon O’Dell, who is in the cast is also the writer, and co-director Jen McQueen is also on stage.  Ann-Carol Pence is on the keyboards and also directing the music, as well as handling a couple of numbers herself.  Lyndsay Ricketson Brown, Diany Rodriguez, Candice McLellan do some great trio numbers as well as joining the guys, Cecil Washington, Jr., Cody Russell and Christian Magby when they do their full-cast ensemble numbers as well as singing a cappella.

They run through more than 30 standards, with a smart stage setting, some great circus acts, and plenty of humor.   It is cabaret style with the band on stage, and they work the audience as if everyone were very close.

While there are many of these type of year-end shows being offered around town, and while some may feel as if they were visiting the Hallmark store; I have to say that over and above the fine quality of the performance, that what impressed what is left of my mind, is that regardless of one’s religious affiliation or lack thereof, that the message is clear.  Life for everyone on this planet could be better if we could learn to accept and protect each other without judging predicated upon flags, colors, languages, or social structures.

Especdially with what is going on in the world today, and what this country has gone through in the past few weeks and the fears of what is yet to come; we need to understand that hating another is akin to ingesting poison in the hopes it shall kill off somebody else.  So let us each find a way to be nice to somebody we may never have met before. 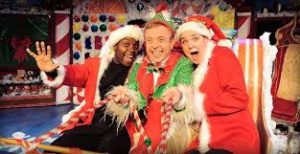 The turkey will soon gone and the lights will shine on the trees and it’s that time when the malls are full of Christmas Carols, the retailers are hustling you to run up your credit card bills, and most of us just wish that things would change for the better for everybody all around the world.  Especially, after our somewhat eerie election.

Years ago playwright David Sedaris actually did work as an elf at Macy’s.   His humor is great; albeit is loaded with single entendres and occasionally loaded with expletives.  So, this is not for the little people, nor the prudes among us.

Directed by Jeff Adler, they have an outstanding cast who all return to reprise their roles.  Crumpet, the hard-up loser who has little choice other than to try to get hired as an elf at Macy’s, is played for the eighteenth year by Harold Leaver.  He is the perfect Crumpet as he blends the original monologue script with some updated ad-libs and works the house by interacting with some of the audience.  Who says that accountants can’t have a sense of humor?

Enoch King returns as Crumpet’s sidekick and maybe a half a dozen other cameo roles, much to the delight of the audience..  And, Lala Cochran is the female sidekick as well as agent provocateur, in many guises.  And two interns get to share center stage with them in several schticks.

Each of these players “owns” their roles, and has played them on a yearly