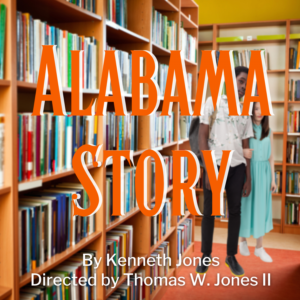 Come on back to the days of the 1950’s in the deep south. For those were times when Sears had colored fountains, Greyhound had colored waiting rooms, and a lot of the folks in “Bama were hard set against integration. It was deeply research by playwright Kenneth Jones, and the six players are directed by Thomas W. Jones, II.

This is a work of some fiction and plenty of history, for the head librarian in Montgomery (Shannon Eubanks) wants to promote reading with the youngsters and one of the books she brings in is a real one, The Rabbits’ Wedding, by Garth Williams. It is a story of a white rabbit and a black one who marry. And that certainly didn’t make it for grown ups in Bama in those days.

The cast includes Don Farrell, Jontavious Johnson, Emily Nedvidek, Justin Walker and Robert Wayne each of whom has their own feelings about banning books, which was being done more often than these days. The Alabama Senator was a staunch racist and therein lies the problem. But, eventually the librarian Emily Reed not only wins out, but is awarded some really positive press and accreditation.

After all, if books with plenty if expletives have shelf space, and political extremists do as well, what’s wrong with a couple of bunnies doing what they do best? The show runs Wednesdays to Sundays at Roswell Cultural Arts Center. Plenty of free parking and good view from all seats. More info and tickets at GET.org