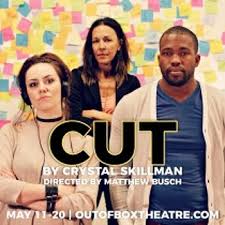 Well this certainly isn’t your grandma’s kind of play.  The story is about three folks in LaLaLand who are working on a reality TV show, and they have to redraft the final episode of The Ladies of Malibu in a matter of just a few hours.

The editor, Danno (Brian Smith), has brought on a newbie, Colette (Bryn Striepe) to work on the script along with Rene (Melissa Rainy).  Each of the trio is a piece of work.  It’s interesting that Brian Smith majored in theatre but also had a minor in psychology; for these three could all benefit from that.

Matthew Busch directed this highly energetic cast of three players, who come and go in a heartbeat as the action moves on.  But, be forewarned that this is a one-act production which is rife with stress, yelling and the constant use of the “F-word” as the universal modifier.

It is not for Ms. Prim, nor the kiddies.  What is really impressive is how the actors can spew out all the anger and dialogue at such a high rate of speed.  Bryn can yell out faster than I can think some days.

This show has been around for a few years and garnered differing reviews.  Do I think it has legs?  That’s for the jury a/k/a audience to decide.  What I can tell you is that the players deliver it up as author Crystal Skillman would have them do.  So just be prepared.