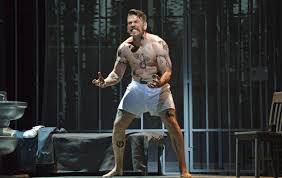 Thirty plus years ago a violent rape and murder took place in Louisiana, and the convicted murderer was put to death after 6 years in prison. It became a non-fiction book by Sister Helen Prejean who has always spoken out against executions. It was later made into an award winning film; and now it reappears as an opera composed by Jake Heggie with the libretto by Terrence McNally. The work was commissioned by the San Francisco Opera and has played to some audiences here and abroad.

The scene is set at Angola Prison in Louisiana, considered one of the most unbearable prisons in the country. We meet Sister Helen (Jamie Barton) who gets a letter from Joe de Rocher (Michael Mayes), who is being held on death row. He is seeking some spiritual counseling and emotional support. Although the real convict was electrocuted, the opera stages this one as a lethal injection. Two families have been torn apart by the deaths of a son and a daughter and Joe’s mother (Maria Zifchak) is in the depths of despair as well.

Joe will not admit he did the killing of the young woman, and all avenues of appeal have been dead ends. The parole board would not suspend the death sentence, and the appeal to the governor was turned down. With no further options at hand, Joe is set to be executed in a few days, on his brother’s birthday.

A principal cast of 17 singers move the story along; albeit you know how it shall end. Joe Mechavich came to Atlanta to conduct the orchestra, and while there are no numbers which you may be humming as leave the venue; it is a grand opus running about 2 hours 45 minutes.

Tomer Zvulun who directs the production also directed it in New Orleans where many knew the story first hand. The opera is sung in English with English super-titles, which may sound strange but is very helpful if you miss a word here or there. There are many others working on this opera, including a childrens’ chorus in act I, and the Opera Chorus in act II.

Just know that many operas have death occurrences, and dastardly deeds. So this is not a Carmen or Pirates of Penzance type of show. In fact, it is certainly not for the youngsters or those who may have had to deal with real life events they feel are mirrored by the story.

The opera is staged at the Cobb Energy Center, which is easy to get to with plenty of parking. And more info is available at AtlantaOpera.org