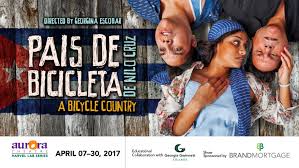 Back in the 1990’s tens of thousands of Cubans fled their homeland in hope of finding a better life in these United States.  It is a tale akin to those who had to leave everything in the 1940’s.  And it resonates for it still takes place in today’s world as Syrians strive to survive.

Nilo Cruz and his parents escaped to Miami in 1970 on a Freedom Flight.  He knows of what he writes, and wrote this one to deliver the angst, the hope, and the dedication to audiences whether they could understand the Spanish or read the projected English translations.

The Aurora’s Anthony P. Rodriguez comes onstage as Julio.  Julio has had an injury and needs some therapy and help, and Ines (Limara Meneses Jiménez) may have been a bit reluctant at the outset, but she delves deeply into the situation with Julio and his friend, Pepe.  Juan Carlos Unzueta is Pepe, and he and Julio really get into it in quite a few scenes.

When they decide they are going to make a run for it, the first thing is how to do so.  They manage to get a raft together into which the three of them can cram in, and try to paddle the 90+ miles from Havana to Florida.  They spend 5 days at sea, and no vessel comes by and spots them and offers refuge.  They have limited nourishment, and experience some traumatic instances of disorientation and fear.

We sit there thinking that they just have to get their feet on the sand of a Florida beach, and they are safe.  For we had a different policy vis-a-vis immigration in those days.   You need to see the show to experience the voyage and the outcome thereof.

The show’s title in English would be A Bicycle Country; and if you recall those days, you know that the embargo kept cars from being shipped to Cuba, and the only cars there were old ones which would have been junked were they here.

Georgina Escobar directed this highly energetic production, which runs about 90 minutes without an intermission.  It is part of the Aurora’s outreach to our growing Latino community, and they are to be applauded for their efforts.   Get more info and tickets at AuroraTheatre.com