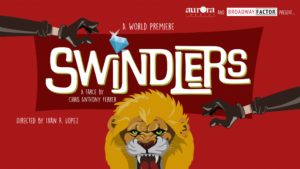 This is a premiere co-production by Aurora and Broadway Factor, which is a real farce taking to the stage here before heading to the Big Apple. This one is written by Chris Anthony Ferrer and Directed by Ivan R. Lopez.

When a couple of sly thieves decide to hit on a wealthy gent who may have an incredibly valuable gem, what could possibly go wrong? Everything. It seems that none of these swindlers have control of anything, as Moliere would design. The grim reaper shows up in various genres. A dangerous lion, a latina who doesn’t even speak Cuban, and as one door closes another opens and as one gun is aimed at a potential victim the bad guy may take the shot himself. As you sit by and wonder where this one can go awry, it will do so with a great cast working through a script which has almost every old film and TV schtick adapted and woven in. This is a riotous trip into insanity land, that is sure to do well; and as we say in show biz, it certainly has legs.

Check it out at AuroraTheatre.com and drag your tired buns over the Lawrenceville for a show where the laughter never ends. Enjoy!