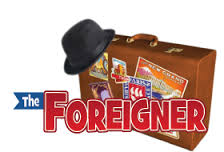 The Foreigner
Lionheart Theatre
through April 2, 2017

When Froggy LeSueur (Billy Woods) shows up at some lodge in north Georgia he brings his friend Charlie (Grant Carden) with him.   Froggy is here for a few days to do some military instruction, and Charlie is with him just to get him away from his ailing wife who may soon pass.  Charlie is a nerdish type who is a proof reader for a science fiction magazine, and he is really having psycho problems.  He doesn’t wish to speak with people, meet new folks, or get involved.

So Froggy invents a story line to help him.   He tells the lady who owns the lodge, Betty (Amy Szymanski), that Charlie is from some unnamed foreign country and doesn’t speak English at all.  Charlie gets into the act and invents some words that might be Klingon, but I am not sure.

The Reverend David Marshall Lee (Jackson C. Trent) is also in the lodge, and he has some interests which are not quite what one might expect of a man of the cloth.  He knows that Betty could have to sell off her lodge for a pittance, especially if it gets condemned by the town building inspector, Owen (James H. Burke).

Rev. Lee’s fiancé, Catherine (Rebecca Winker Spring) is also staying there and she has some news that could change lives for her and her fiancé.  Her son, Ellard (Bridger Trent), is keen to get involved even though he may be somewhat developmentally delayed.  So we have a collection of weirdos who try to figure out what they are doing.

In Act II, some very unexpected action comes into play;  and while all comes out right, in the end, it is a hilarious solution to a dangerous problem.  This is a show that’s been around for quite a while and always gives the audience a couple of hours of terrific laughter.  If you think that all the nutty politicians are on TV, please know that you find them also to be on the stage.

Lionheart is easy to get to off Norcross square, with free parking, comfy seating and complimentary goodies at intermission.  More info and tickets at LionheartTheatre.org