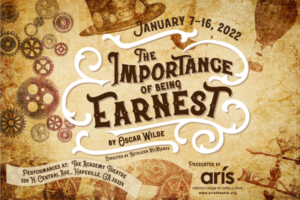 The Importance of Being Earnest
ARIS Theatre
through January 16, 2022

Oscar Wilde was born in Dublin to a well-off family, and had all the benefits other than peerage. He became a poet and writer, fluent in several languages and got to travel both to the Continent as well as to the US and Canada. In the days when he came out of the closet, that was quite a problem as the laws in England in the 1800’s made any homosexual acts a felony and upon conviction one could be sent down for a sentence at hard labor. Wilde wound up doing 2 years in the slammer. He left the UK and lived in Paris and he passed away at only 46 years of age. One of his most memorable plays is this one.

The play is a romp. The two main male characters are Jack Worthing (Jordan Mitchell) and his friend Algernon Moncreiff (Phil Mann). Jack lives in the home shires and has invented a persona called Earnest which he uses when he scampers up to town to party hearty. Things get a bit dodgy when Jack falls for Algernon’s cousin, Gwendolen (Maggie Beker) a demure and impressionable young lass.

Gwendolen is drawn to Jack not only by his demeanor but she reads a lot into the name Earnest. One who doesn’t get so impressed is Gwendolen’s aunt, the prim Lady Bracknell (John Ammerman), who is stand-offish and somewhat acerbic. In the meantime, the plot starts to get more insane as Algernon decides to go Bunbury-ing down to the country manor posing as Earnest and he falls head over heels for the lovely Cecily (Tamia Fair). Nothing seems to be working out as one fabrication falters after another, and how the plot resolves is the stuff the play is made of. Just pay attention to old Ms. Prism (Jessica Fern Hunt). K. Ken Johnston,and Dan Reichard are in supporting roles, and the camped up Steampunked production is directed by Kathleen McManus, on a Moliere style multi-door set; it’s a fun evening.

The show runs about 90 minutes at the Academy Theatre on North Central Ave in Hapeville. Easy to get to, free parking, plenty of goodies, and good seats. More info at ArisTheatre.org